Jason Lemieux is a level 40 fungus vendor located in Tarren Mill in the contested territory of Hillsbrad Foothills.

He was rescued by an adventurer during the Legion invasions. 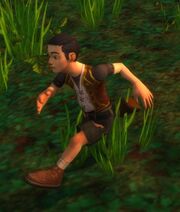 Jason Lemieux as an innocent child running among the mushrooms.

In Old Hillsbrad Foothills, a young boy named Jay Lemieux can be seen running around Tarren Mill. This is presumably Jason as a child, when he was alive.

Legion Invasion
Apologies. I'm not much for fighting, but I'm sure Craig and Hans will be more than helpful.