Jasper Fel is a level 30 vendor located in SI:7, Old Town in the human city of Stormwind.

Jasper journeys to Draenor and is found in Spires of Arak. While he was scouting the area, he was captured by the Arakkoa Outcasts in Veil Terokk. To his embarrassment, he had to ask the commander at their arrival to vouch for him, having wanted to make a better impression.

After being freed he returns to Southport from where he continues on to Admiral Taylor's Garrison and finds out that it has been completely taken over. Its architect, Bryan Finn, was one of his best friends. Once the residents were put to rest and the traitor Ephial killed, he saw the ghost of Admiral Taylor and guided him back to Southport. 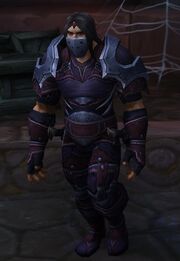 Jasper Fel in Hall of Shadows

He is also found in the Hall of Shadows as part of The Uncrowned.

When The Uncrowned infiltrated the SI:7 headquarters in order to reveal Detheroc, Jasper Fel was sapped by Taoshi.[1]

He later journeyed to Deliverance Point on the Broken Shore and is seen playing Hearthstone with Don Alvarado.

Speak quietly and with great care, the wrong word in these parts could get your throat cut. Now, what is it you need from me?