Je'neu Sancrea is a level 25 jungle troll quest giver and a member of the Earthen Ring found just inside Blackfathom Deeps of Ashenvale. Before the Cataclysm, he was located in Zoram'gar Outpost.

In the events of invasion of Draenor, he and Zeya were captured by the Twilight's Hammer and barely escaped before they could be sacrificed to Aku'mai. 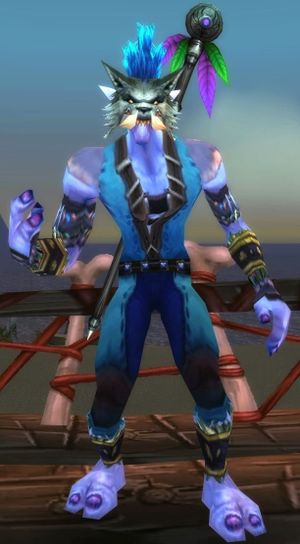 When at the outpost.

The subject of this section did not make it out of the beta stages of Cataclysm.

The elements speak to us, <class>. They share knowledge that we must learn, and they share secrets that must be kept.

Most people in Zoram'gar Outpost have no idea that one of their own, Je'neu Sancrea, is a member of the Earthen Ring. Je'neu holds no high rank in the Earthen Ring, but he is a particularly active member. As a consequence, he has gained a reputation for involving himself in many different issues, including investigating elemental activity and recruiting heroes to venture into various locations associated with the Twilight's Hammer.[1]