Jed'hin was a sport practiced by the eredar, a tradition lost during the draenei's long journey. Grand Artificer Romuul describes it as "ritual combat" and "the old ways."[1] Echoes of the citizens of Mac'Aree on Argus can be found still playing the game. One needed not worry about competitors' heads, as only males with the thickest crests chose to compete.[2] It seems to be an ancient sport, as it was described as a "basic ritual" and Councilor Othaar liked to think that it showed how far the eredar had come.[3]

At the Circle of Aspirants in Mac'Aree, players can challenge each other in jed'hin by using the Jed'hin Master "vehicles".

Jed'hin started as a fan-made game set inside of the Warcraft universe between a couple of friends in the Wyrmrest Accord server and then as small tournaments within the draenei-related guilds Te'amun and Sha'nash of Moon Guard, and the Sha'tor on Wyrmrest Accord. It has since spread across other guilds and roleplaying servers.

Jed'hin is a competitive full-contact wrestling sport where a wrestler attempts to force another wrestler into submission within a large, circular ring. The sport originated in Argus, where it was practiced professionally.

In addition to its use as a trial of strength in combat, jed'hin has also been associated as a spiritual ritual.

Professional jed'hin can trace its roots as a form of sporting entertainment. Only males participate in jed'hin due to both physiological reasons and cultural ones: males represented perseverance and strength, females represented diligence and gracefulness. 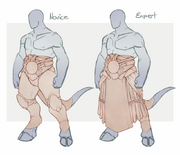 The winner of a jed'hin match is either:

1.The first wrestler to force his opponent to step farthest from the ring

2.The first wrestler to force his opponent into submission

The referee or judge may award the win to the wrestler whose opponent uses an illegal move, they also can call the match and declare the winner if the fight's taking too long for the sake of the losing wrestler, due to the superior skill of his opponent, since he was already in an irrecoverable position with no chance of winning.

Matches consist of several rounds and only last a minute, as usually one wrestler is quickly ousted farthest back or pinned. However, they can occasionally last for several minutes.

At the ring both wrestlers face each other from opposite ends of the ring, and must bow to their opponent simultaneously. The referee can restart the bout if this simultaneous reverence does not occur.

At the referee's command, both wrestlers charge and must crash their crests first before they are allowed to grapple each other. The referee immediately calls out if there has been crest contact. Different grappling techniques such as clinch fighting, throws and take-downs, joint locks, pins and other grappling holds are allowed. Some kicking moves are also allowed, as are some types of tail swipes. The referee can decide whether a move was excessive in force, or illegal altogether.

Bouts are typically very short, usually less than four minutes. If after four minutes, or five matches, the wrestlers are still deadlocked with no end of the bout in sight the referee can determine the winner.

Wrestlers are bare-chested, though some wrap their necks and chest to help stiffen the muscles.

A large, thick belt (three-layered) that covers half up the chest is usually worn to protect the exposed abdomen from kicks. The belt is optional.

Traditionally, novices wore leggings so that they could learn leg positioning and other take-down techniques. Experienced wrestlers switched to thick kilts that prevented the opponent from knowing where the opponent's legs were so as to heighten difficulty and prolong the match. Nowadays, both leggings and kilts are interchangeable.