Jergosh the Invoker was originally a level 16 elite orc warlock once found in Ragefire Chasm.

Jergosh the Invoker rejected the ideals of the orcs and practices the dark and demonic arts of the warlock. A leader of the Searing Blade Cultists, Jergosh dwelled within Ragefire Chasm, concocting a scheme dangerous enough that drew the attention of Thrall himself. He was guarding the Blood Filled Orb, which was needed to summon Zelemar the Wrathful if the player had the quest

With the return of the Burning Legion, Gul'dan called upon the surviving leaders of the Shadow Council's sects: Jergosh, Nagaz, and Allaris Narassin. Jergosh, having survived his prior encounter with a group of adventurers in Ragefire Chasm, was sent with Braelyn Firehand to Caer Darrow to retrieve the Book of Medivh from the Cult of the Damned. After obtaining it, he and Braelyn were killed by a warlock adventurer.[1]

The subject of this section was removed from World of Warcraft in patch 5.0.4 but is present in Classic. 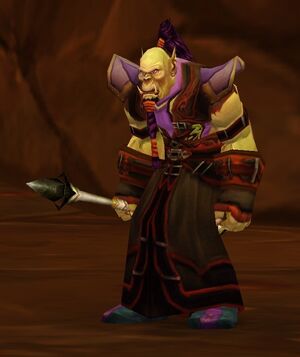 Jergosh is identical to the other Searing Blade Warlocks in Ragefire Chasm, except that he doesn’t have a Voidwalker pet, has a few more hitpoints, and he hits a bit harder. He will cast

[Curse of Weakness] throughout the fight, which are identical to the Warlock versions and equally strong. Immolate is a somewhat strong DoT spell, and Curse of Weakness will reduce the damage dealt by the target by 6.

Be wary of the other Searing Blade Cultists around him. It is best to clear the area around him until only Jergosh and his close followers are left. Once that happens, take down Jergosh, and eliminate the cultists around him. Be careful of the curses he will apply, and his spells, which do slightly higher damage.