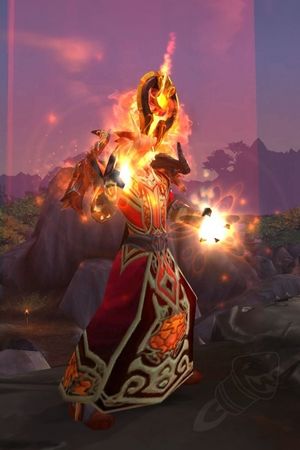 Jeron Emberfall is the Horde Tower Guardian in Ashran, found atop the Emberfall Tower itself. He stands watch over both the Emberfall Tower zone and Volrath's Advance, summoning dazzling phoenixes to explode upon the heads of any attackers who should attempt to invade the bases below.

He later participated to the battle for Seething Shore from the Horde gunship. Speaking with him provides refreshments.

Any alliance get aboard this ship, they'll be incinerated.

Could you conjure me some food?

A powerful opponent, Jeron will bombard enemies within a substantial range of his tower, making assaulting these zones much harder without first defeating him. He can be reached through climbing the tower itself, although defeating him will not be an easy task. Succeeding will provide special rewards, and make inhabiting the surrounding area far easier.

In the current build, Jeron's colorful bombardment is fairly powerful, and can kill full health cloth classes in just a few hits. He attacks every few seconds, and switches targets frequently, although he does sometimes repeatedly strike the same player, presumably due to excessive threat. Players seeking to avoid his attacks can stand where the tower itself obstructs his line of sight, preventing him from targeting them. For ranged classes, or while waiting for a group to gather to assault the enemy base, the easiest option is to stand very close to the to the tower itself. His attacks are otherwise very dangerous for lone Alliance in the area, receiving the full brunt of his wrath.

As he uses fire spells and can summon phoenixes, he might be a blood mage.