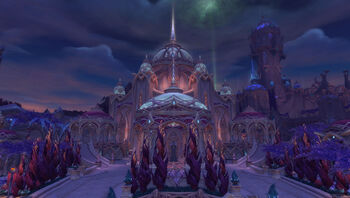 The Jeweled Estate, with the Nighthold visible in the background to the right.

The Jeweled Estate is a large mansion located in the Court of Stars in the eastern section of the nightborne capital of Suramar. The estate is the domain of Suramar's nobility, and primarily used for specific functions in the form of banquets, balls, and special meetings. It was overseen by Melandrus, a high-ranking advisor to Grand Magistrix Elisande.

The building itself is ornately designed and furnished, and sits in the very heart of the most affluent and aristocratic portion of the city. It sits just off the Midnight Court and has access to Suramar Bay through the nearby Moonlit Landing. The estate is one of the largest and most important buildings in Suramar City, with few outside the ruling classes or the Duskwatch permitted access at any time.

Since the outbreak of the Nightfallen rebellion among nightborne society, the Jeweled Estate has become one of the targets of the Nightfallen resistance as a result of its use by the Grand Magistrix and her allies. Along with the Nighthold itself, the Jeweled Estate and its surrounding district acted as one of the primary bastions for Suramar's ruling powers.

Nightborne society (like that of the Kaldorei Empire before it) has historically been extremely class-based, with an aristocratic nobility rigidly ruling over the majority of commoners. Generally, these two factions are divided demographically within the city along the east and the west; the western districts are mostly middle or lower classes, while in the eastern ones reside the very upper echelons of nightborne civilisation. At the very heart of the Court of Stars in the far east of the city sits the Jeweled Estate, which exists as the main base for Suramar's ruling classes outside the Nighthold.

At the time of the third invasion of the Burning Legion, an insurrection led by First Arcanist Thalyssra sought to overthrow the regime of Suramar's ruler, Grand Magistrix Elisande, for allying their people with the demons of the Burning Legion. As a result, the Nightfallen rebellion subsequently broke out, in which the rebels eventually received wide support from the repressed majority of commoners, while Elisande received the significant backing of the city's ruling elite.

Though initially small in size, the insurrection began to quickly gain support and achieve successes as the nobility resorted to ever more extreme measures to quell dissent. Though the Court of Stars and the Jeweled Estate remained secure for the most part, rebel activity still occurred. The devilsaur Su'esh was notably released from the city's menagerie by rebel agents, and went on to cause havoc throughout the district and around the exterior of the Jeweled Estate itself.[1]

As the Nightfallen rebellion continued to rage and the insurrection gained further successes, the Nightfallen leadership began to carry out further operations to topple the regime of Grand Magistrix Elisande. A unique opportunity arose for the rebels when it was announced that Elisande herself would be attending a large gala held in the Jeweled Estate of the Court of Stars in an attempt to reassure her supporters.[2]

Thalyssra and the Nightfallen leadership resolved to make an attempt on Elisande's life during the proceedings, in the hope of shortening the conflict. Thalyssra also presented her agents with the objective of killing Advisor Melandrus, who had notably betrayed her during their coup to oust Elisande in the events leading up to the rebellion.[3] With the help and connections of their double-agent Ly'leth Lunastre (who had recently won election to Elisande's inner council[4]) a small group of Nightfallen agents were smuggled into the Court of Stars on the night of the ball, disguised as members of the nightborne nobility.

The party was successful in eventually fighting their way to the Jeweled Estate itself, which was full of aristocrats and officials enjoying the event, including some extremely high-ranking individuals such as Spellblade Aluriel and Star Augur Etraeus. Still in disguise, Thalyssra's agents mingled among the party-goers and managed to root out a disguised dreadlord agent placed there to be on the lookout for deceit.

Following this, the infiltrators confronted Elisande herself, in conversation with Advisor Melandrus who she chastised for the rebellion's recent successes. Before anything further could occur, however, the Grand Magistrix teleported herself back to the Nighthold, ordering Melandrus to deal with the threat. In the fight that ensued, Melandrus was slain. The Nightfallen agents managed to subsequently escape the scene, though their most optimistic goal had not been achieved. Despite this, Thalyssra was deeply pleased and comforted by proof of Melandrus's demise, believing Elisande was at the very least weaker without him.