For the Artifact weapon, see

The Jeweled Scepter of Sargeras's default skin in World of Warcraft: Legion.

After his defeat at the Well of Eternity, Sargeras immediately planned his next method of infiltrating Azeroth. He knew he couldn't rely on a static portal; to serve a titan, such a gateway required an astronomical amount of power, and the most promising source had been destroyed in his last attempt. Moreover, the Highborne's laborious preparation and spellwork had given away his intentions, which had allowed the night elf resistance to thwart him. If he wanted to overcome Azeroth's defenders, Sargeras needed to enter the world with minimal warning.

Thus he commanded the eredar to forge a tool that would wrench open rifts between worlds for only a short time, just long enough to let a portion of his soul through. Although that meant he couldn't enter Azeroth in his most devastating form, such an instrument would clear a path for his avatar to lead the Legion's invasion or carry out subtler schemes. Such an instrument would also weaken the integrity of the physical universe and threaten to collapse it, but Sargeras considered those to be only side benefits.

First, scores of magi conducted dark rituals to channel countless portals into a single staff. They then projected the empowered artifact into every corner of the Great Dark Beyond, weaving it into the fabric of reality, creating a thread that could be pulled to unravel the seams of the physical universe at will. To fuel this monstrous undertaking, a hundred warlocks sacrificed a hundred demons, selecting them from among the Legion troops that had been part of the failed invasion of Azeroth. Thus was forged the Jeweled Scepter of Sargeras.

Soon after the War of the Ancients, Sargeras had a vision: the Well of Eternity imploded once again, but this time, it dragged him down to the very core of Azeroth. He was there for only an instant, but in that moment, he saw Azeroth's slumbering world-soul--and in that moment, the world-soul opened one eye and gazed at the Dark Titan. He was enraptured. Since then, the eye of Azeroth's world-soul has not been far from his thoughts. He commanded the eredar who forged the scepter to crown it with that lone, wondrous orb. Next to it, the eredar placed two nathrezim wings, a testament to Sargeras's conception of the world-soul: corrupted, demonic, and most importantly, his.[2]

Aegwynn and the Dragon Hunt

The Scepter of Sargeras was a marvel of arcane and fel sorcery, an instrument fit for a titan. It could lacerate the connective tissue of the physical universe, opening portals to any realm Sargeras desired, yet the rifts it created would allow only a portion of his soul to enter. It was a minor setback. Sargeras would simply have to be more inventive with his plans. And so, he waited. Millennia later, Sargeras saw his opportunity. The Guardian Aegwynn had become one of the most powerful mages on Azeroth, and not even the Council of Tirisfal could control her. Her pride made her a fine candidate for corruption. Sargeras could not infiltrate Azeroth in his most lethal form, but perhaps he could use the rebellious Guardian as a vessel for his machinations.

In the icy wastes of Northrend, Sargeras drew the Guardian Aegwynn into battle, advancing on his opponent as the portal he'd torn into Azeroth closed behind him. His avatar was but a pale shadow of his true form, but that hardly mattered. After all, even if he couldn't defeat Aegwynn, he could still use her for his own ends. He had only to weaken her defenses, to create an opening for a shard of his spirit to break through. Just as he'd infiltrated Azeroth with the scepter, so too would he invade Aegwynn's soul, corrupting it into another instrument of the Legion. Afterward, Aegwynn would remember the battle as the most brutal she'd ever fought, but she finally destroyed the avatar of Sargeras in an avalanche of arcane might. As she stood triumphant over her fallen foe, she could scarcely believe that she had won. Little did she know that she had lost.

After Aegwynn defeated Sargeras's avatar, she interred his corpse in the ruins of Suramar, along with the artifacts that he bore. Deep beneath the sea, shielded by enchanted Highborne seals, the Scepter of Sargeras remained for centuries, its power undiminished. Sargeras attempted to regain control of the staff through Aegwynn, but the task proved more difficult than he had estimated. He could sway the Guardian in many ways, but he could not compel her to exhume his scepter from its watery grave. Something held her back, a primal instinct louder than Sargeras's whispering. She knew the artifact was dangerous, that its use risked the destruction of all things. Even possessed by the Dark Titan, she would not yield.

Sargeras realized that greater subtlety was needed. Eventually, he extended his pernicious influence to Aegwynn's son, Medivh, as he developed in her womb. Through this new vessel, Sargeras planned to recover his beloved scepter. [2] 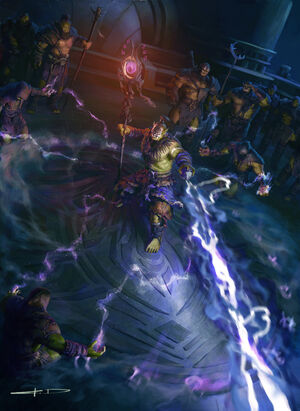 A demon in the Tomb of Sargeras located on the Broken Isles held the Scepter until it was killed by Ner'zhul's henchmen, Tagar Spinebreaker and Fenris Wolfbrother directed by Teron Gorefiend.[3] Ner'zhul used it along with the Book of Medivh and the Eye of Dalaran to create a multitude of ultimately unstable portals across the planet simultaneously, which tore Draenor apart, turning it into what is now known as Outland. The scepter was in Ner'zhul's possession when he entered the rift. [4] Kil'jaeden retrieved it from Ner'zhul when he captured Ner'zhul on the other side of the rift that he had opened with the scepter.[2]

Kil'jaeden would set about using it to invade Azeroth. But he was not as powerful as Sargeras; he could not open a portal mighty enough even for his avatar. Thus he conspired with Kael'thas Sunstrider to create a gateway through the Sunwell, the blood elves' ruined fount of power. Combined with the world-rending force of the scepter, Kael'thas's portal cleared the way for Kil'jaeden's full form.[2]

Referred to as simply the

[Scepter of Sargeras], it is the Artifact weapon for Destruction warlocks.

Gul'dan got his hands on the scepter and sent out members of the Shadow Council to retrieve the other artifacts: Jergosh the Invoker to get the Book of Medivh from Caer Darrow, and Nagaz and Allaris Narassin to get the Eye of Dalaran from Tol Barad. After gathering the items at the Broken Shore, a warlock adventurer uses the Scepter of Sargeras to disrupt the portal ritual and then flees with it in their possession.[5]

Created through incredible effort by hundreds of Sargeras' servants, this scepter can rip open dimensional gateways between worlds. It was entombed beneath the sea for centuries, then used by the orc shaman Ner'zhul to open the portals that tore the world of Draenor apart, leaving behind the shattered realm of Outland. The scepter was finally secured by the elite magi of the Kirin Tor. Unable to destroy it, they hid it away in a magically protected chamber and put it under eternal watch to prevent it from ever being used again.