“In situations like these, the clear answer is the only answer. These monkeys will leave when we force them to leave! To not defend our town and those we love would be the only true crime. Thus is the way of the Huojin.”

Ji Firepaw is a pandaren and a follower of the more direct Huojin philosophy, is adamant that inaction is the greatest injustice. He holds that it's honorable to defend home and family no matter the cost. Outgoing, passionate, and not one for deep thought, he is always the first into the fray. Ji finds himself attracted to the practicality that defines the Horde. Although it will cost him dearly, he will decide to carry the Horde banner when he leaves the Wandering Isle.[4]

After the Wandering Isle, Ji can be found as a monk trainer outside the Ring of Valor in Orgrimmar's Valley of Honor. The Orgrimmar Grunts, when asked where the monk trainer is, comment that Ji watches the fights in the arena, and occasionally participates himself. He was later placed in charge of welcoming newcomers to the Orgrimmar Embassy. As the leader of the Huojin, Ji would eventually come to be seated on the Horde Council as the pandaren representative.

Li Li was running after Shu to Wu-Song Village but she lost his trail. Ji was there and advised her to find him by a method of Huojin.

Ji and Aysa Cloudsinger met the pandaren adventurers sent by Master Shang Xi in an effort to recover the four elemental spirits. After recovering Huo, Ji was unable to wake Wugou until the coming of the adventurers sent by Aysa. Afterward, Ji led an assault to the Morning Breeze Village to solve the hozen problem. When the elemental spirits were recovered, the pandaren discovered that the pain of Shen-zin Su was a thorn - The Skyseeker. Ji decided to blow up what was left of the Skyseeker, causing him to fall out with Aysa. With the battle between the Horde and the Alliance affecting their land, Ji chose to join the Horde at any cost. To prove his loyalty, he fought in the Ring of Valor against a gronn, an ettin and a magnataur for Garrosh Hellscream.[5]

Imprisoned by the Kor'kron and beaten unconscious, Ji was rescued by Aysa Cloudsinger during the Siege of Orgrimmar and taken out of the city. Begging him to live, Aysa promised that the two of them could return to the turtle and be together.

Ji survived and served as a liaison for the Horde and Taran Zhu during the trial of Garrosh Hellscream, such as directing the Horde leaders to an appropriate temple for a discussion of Garrosh's defender.[6] 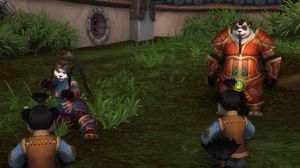 Aysa and Ji teaching a class together.

Ji is present in Grommash Hold witnessing Vol'jin's death after the battle of the Broken Shore.

True to her words at the Siege of Orgrimmar, Aysa and Ji returned to the Wandering Isle. They can be found in Mandori Village after the isle becomes the monk Order Hall, teaching monk trainees together.

When a Horde player reaches Prestige Rank 2, Ji can be found in the Undercity alongside other notable leaders of the Horde. During

Ji Firepaw was not present for the Orgrimmar parade or the dinner as he was far away. His followers, however, participated in the feast.[7]

He later arrived to the Orgrimmar Embassy with the other leaders.

During one of his daily inspections of Orgrimmar a few weeks before the War of the Thorns, Varok Saurfang saw Ji demonstrating a form of unarmed combat to a new batch of monk students in the Valley of Honor. Firepaw smiled at Saurfang and offered a salute, which Varok returned before continuing his walk.[8] 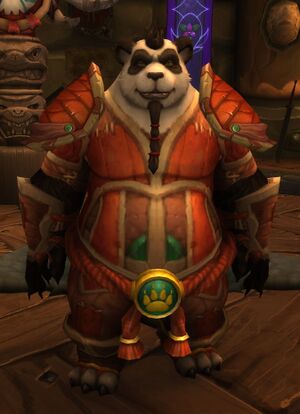 Ji Firepaw within the Orgrimmar Embassy.

During the Blood War, Ji accompanied the Horde forces to Dazar'alor and can be seen atop the main mast of The Banshee's Wail. Ji later attended Talanji's coronation.[9]

When Baine was arrested and Zelling was killed for their parts in freeing Derek Proudmoore from Horde captivity, Ji believed Baine was right to act when he did lest his anger turns into a greater threat down the line.

Ji Firepaw supported Saurfang in his revolution against Sylvanas and traveled to Thunder Bluff to tend to the injured Baine because he had no wish to see Orgrimmar under siege once again. Baine and Ji were soon joined by Mayla Highmountain, who was ordered by Saurfang to defend Thunder Bluff in case Sylvanas launched a counterattack.[10] During the conflict, Saurfang challenged Sylvanas to a Mak'gora, which ended in his death and Sylvanas's abandonment of the Horde. A stunned Lor'themar ordered for champions to report what had transpired to Baine.[11] After learning that Saurfang had passed, Ji remarked on the Huojin belief of it being better to die doing what is right than to live in the shadow of what is wrong. He then declared that Saurfang would have made a good Huojin and attended the High Overlord's funeral.[12]

Some time later, Ji made his way into the Orgrimmar Embassy, where he sought to strengthen the Horde. Upon learning that a vulpera caravan had arrived at Grommash Hold he informed the Speaker of the Horde that they not only wished to address the Horde but had personally requested their presence. However, Ji warned that it wasn't the best time for guests and requested that the Speaker see them as they were able.[13] This would ultimately start the chain of events that end with the Voldunai vulpera led by Kiro joining the Horde.[14] When the Black Empire attacks the Vale of Eternal Blossoms, Ji can be seen defending the Shrine of Two Moons.

In the aftermath of N'Zoth's death and the end of the Fourth War, Ji and the other Horde leaders received the terms for an armistice from the Grand Alliance, putting the Fourth War on hold indefinitely, if not permanently. With that matter settled, Lor'themar Theron addressed the absence of a Warchief. Despite support for Thrall to take the mantle on again, he refused, citing that he had promised Varok Saurfang he would not take on the role once more. Instead, he brought up the idea of the Warchief being necessary, instead bringing in the belief that a change was needed for the Horde's leadership. With this, the Horde Council was created, with Ji representing the Huojin Pandaren.[15]

When a Horde Council meeting is derailed by a failed assassination attempt on Talanji, the Zandalari queen and a key ally, Ji and the rest of the Horde leaders are forced into action. They empower the young troll shaman Zekhan, still grieving the loss of Varok Saurfang, with a critical mission to aid Talanji and help uncover the rising threat against her.[16] 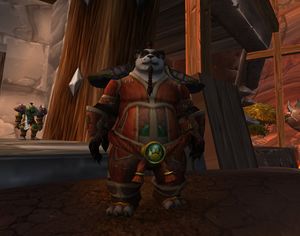 Ji outside the Ring of Valor in Orgrimmar.

The only true crime is inaction.

Hah! Waking this guy is no easy feat! I've hit him, I've tried to pull him over with a rope, I've thrown my body into this gong, and nothing! Ah well, I've got more ideas to get started on.

The amount of time Aysa spends practicing seems excessive... but you can't deny the results. Her form is beautiful.

Maybe you should talk to her.

Aysa? I don't know what to say to her. Should I tell her she's gorgeous, or would she find that creepy? Maybe I could tell her I admire her poise - but then she might think I don't have any personality!

This day seems to be one full of hard decisions. Having the courage to make them is gravely important, for the sake of us all. I did what I had to do, and we may have all been doomed if I had not… but sadly, not all see it that way.

It is time for me to leave Shen-zin Su, that those here might be free from the burden of my difficult choice, and that I might fight on for the sake of a much larger world.

I've only known Korga a short time, but he and I could be brothers if he were born in a different skin - he possesses bravery and honor that I would gladly stand beside. You too could be my <brother/sister>, after all we've been through together. I'm hoping you might join us, but I understand that there is much to consider.

These are my kind of people. You can really feel like they're going somewhere!

Anyways, what can I show you about being a monk, friend?

It is always good to see you, <name>. Let us work together to strengthen the Horde!

Look at the size of the dinosaurs!

I can't wait to punch one.

[120] A Display of Power
I can sense much anger and frustration among those gathered here today. In my homeland, we saw such feelings manifest into very real threats after we spent too much time and energy suppressing them.

Baine had to act, lest his anger turn into a greater threat to the Horde.

We should all take a lesson from this.

After Baine is informed of the death of Varok Saurfang
We Huojin believe that it is better to die doing what it right than to live in the shadow of what is wrong. Saurfang was never one to sit idle when his strength was needed, no matter the cost.

He would have had made a good Huojin.

It is always to see you, <name>. Let us work together to strengthen the Horde!

As a result, this interaction was changed during beta. Ji now simply greets characters of either gender by saying, "You seem poised and ready. I can tell we are going to be good friends." Zarhym commented that "...Your feedback has been received. I don't think we need another 100+ pages of discussion about one line of quest text or this will end up being a very long beta."[18]

A reference to the controversy was added a few patches later. When Ji and Aysa are both at Morning Breeze Village he has some special dialogs that can be read above.