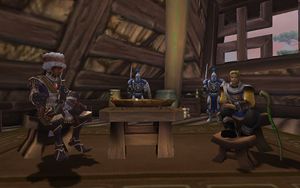 Wrathion and Anduin playing the game.

A board game known as jihui is one of the most prominent games found throughout Pandaria, mostly among the pandaren, but others such as Wrathion, Vol'jin, and Tyrathan Khort have begun learning the game as well.

Wrathion kept one jihui board for himself.[3]

Jihui is played with two players, one black and one red, on a flat game board consisting of twelve by twelve grids. Each player has twenty-four six-sided pieces that are stored in cylindrical canisters when the game isn't being played. Each one has symbols inscribed on it, including dots to indicate movement and an arrow to indicate facing.

The game begins with each player shaking out a half dozen cubes from their canister, centering them on the last row of the gridded game board, orienting them to their lowest value, and facing them toward the opposition. Each player then shakes out one more cube and compare the highest side. The player with the highest value is the one allowed to move first. These last cubes are then returned to the canister, and the game begins.

A player can move as indicated by the piece's uppermost face and attack, or change the face by one side, then either move or attack. It's also possible to pick up the piece and roll it, randomly selecting a new side, then return it to its facing and play. A player can also decide not to move at all, instead drawing a random new piece by shaking and upending the canister. The first piece that falls out is put into play. If two fall out, the second is removed from play, and the opposing player is allowed to draw a new piece without penalty.

Jihui pieces include archers, cavalry, kites, knights (which can move far), warriors, and warlords. Each player also has a navy consisting of six ships. One of the ships' faces is the fireship, a very important piece that can destroy anything but is consumed in the destruction, removing it from play. Some players reportedly burn the piece. The only way the fireship face can come up for a ship is through the aforementioned method of rolling a piece to randomly select a new side. Only one of the ships in a player's navy can become a fireship.

Jihui encapsulates much of pandaren philosophy. It simultaneously encourages thoughtfulness and incorporates impulsiveness. It balances deliberation with chance, but chance can also be punished. For a player to lose to a foe who has more pieces on the board is not a great loss. To yield to a superior position, regardless of the pieces in play, is not considered an honorless loss. While the game's aim is to eliminate all the opposition's pieces, playing to that point is considered ill-mannered and even barbaric. Usually, one player finds themselves out-maneuvered and surrenders, though some rely on chance to turn their fortune around and achieve victory. Playing to a standstill, having both players' forces balanced, is considered the greatest victory of them all.[2]