For his encounter in the Throne of Thunder, see Jin'rokh the Breaker (tactics). 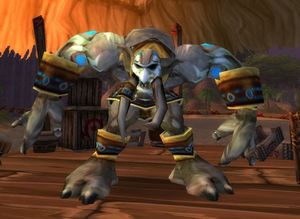 Jin'rokh the Breaker is a Zandalari dire troll that first appeared in Yojamba Isle in the contested territory of Stranglethorn Vale, was removed during the Cataslym and eventually reappeared as a boss in the Throne of Thunder.

Jin'rokh was a part of an envoy sent to Stranglethorn Vale in order to stop Hakkar the Soulflayer from escaping Zul'Gurub. He was originally a level 60 quest giver and a member of the Zandalar Tribe faction. Warriors and paladins could turn in Paragons of Power to Jin'rokh in exchange for special armor made by the tribe.

After Hakkar was defeated Jin'rokh and his fellow trolls left Yojamba Isle back to Zandalar.[1] That was until the Cataclysm destroyed part of their land. He, along with those invested in Zul, made their way back to the main lands to reunite the tribes, and eventually to Pandaria. When the Thunder King awoke, he rewarded the most loyal and ambitious Zandalari trolls with power beyond their wildest dreams. Jin'rokh was one of the first to receive the King's blessing, and even though Lei Shen's gifts nearly tore his body apart, the troll is now capable of calling the fury of the storm in battle.[2]

He was killed by the adventurers of the Alliance and Horde when they invaded the Throne of Thunder.

My dealings are with warriors and heathens.

Jin'rokh, I need assistance in recovering a piece of my Freethinker's outfit.

Jin'rokh, I need assistance in recovering a piece of my Vindicator's outfit.

In addition, he gives necklaces out depending on obtained faction: