Jintha'Alor (or Jintha'alor) is the capital city of the Vilebranch tribe located in the Hinterlands. Jintha'Alor was built by the trolls of the Amani Empire, it is the second largest city of the forest trolls, second only to Zul'Aman. The leaders of Jintha'Alor were Vile Priestess Hexx and Hitah'ya the Keeper. Rumors exist of an ancient egg of Hakkar the Soulflayer residing in the city.[1] It is named for the great Amani warrior Jintha.

The Totem of Akil'darah can be found here. 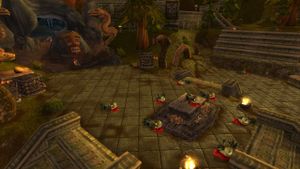 The Horde now have a very small encampment at the base of the ruins. Further up in second-to-last tier is a pit that holds a large, roped down troll. The top cave now is filled with spiders, while the exterior area is filled with sacrificed Vilebranch trolls. In addition, the area where the bird cage used to be there are now three Wildhammer clan dwarves.[2]

The Jintha'Alor ruins are a troll archaeology dig site. For

The Vilebranch trolls call this settlement home. Several smaller troll enclaves are scattered throughout the Hinterlands.[3]