The jinyu are a race of humanoid fish-like creatures that live in Pandaria.[4] They are an elder and wise race, looked up to even by the pandaren. Masters of the water, they have been known to stick their staffs in rivers and literally hear what the land is saying. The waterspeakers are an upper caste, spiritual leaders that use the river to listen to the future.[5]

The ankoan are descended from jinyu who left Pandaria long ago to hunt in the depths of the oceans.[6]

The jinyu originated from murlocs who were fortunate enough to live near the enchanted pools of the Vale of Eternal Blossoms. The magic of the pools expanded their minds and grew their bodies until they became one of the great ancient cultures of Pandaria.[7] They worshipped the August Celestials, and in return, the spirits offered them knowledge and guidance. For a time, there was peace.[8] The Temple of the Jade Serpent particularly later became sacred to the jinyu, who now use its scrying pool to serve as their eyes and ears throughout the continent.

In the days before the Sundering, legend has it that all rivers flowed to Pandaria. Few were more aware of this than the clever jinyu. Over time the wisest of their people learned to commune with the waters of the river and listen for the future and news it would bring. These elders were respected by most races and earned their title of "Waterspeakers".[9] The jinyu also had a written language before the rise of the first mogu dynasty, though today it is not possible to understand it anymore.[10]

In time a jinyu empire emerged,[11] ruling all of Pandaria from the Vale of Eternal Blossoms.[12] In the years before Lei Shen's rise to power, the mogu clashed against the other races of Pandaria. The mogu fought against the jinyu empire in a battle that lasted forty days and forty nights. The power of the jinyu waterspeakers nearly defeated the mogu, but at the last moment they were slain by an unknown mogu foot soldier, who hurled the jinyu's own fishing spears back at them, piercing the waterspeakers' shields and deciding the battle. After this, the jinyu resistance ended.[11] During the reign of mogu emperor Lei Shen, the mogu invaded the jinyu kingdoms and slaughtered all who opposed them. Afterwards, the jinyu were enslaved along with the other mortal races of Pandaria.

The jinyu took part in the Pandaren Revolution, listening to the waters to divine where the mogu would first respond when the rebellion started.[13] After the revolution, they apparently swore allegiance to the pandaren emperors.

Feud with the hozen 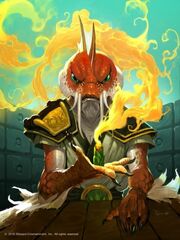 The jinyu have been at war with the hozen for a very long time.[5] Many thousand years ago, the Pearlfin tribe stood on the throne of all Pandaria. At some point the hozen approached them for help; the jinyu felt sorry for them and taught them how to survive. The jinyu gave them their trust, but over time the hozen grew strong and bold and began taking the land for their own,[14] leading them to betray the ones that had helped them. Over time the jinyu experienced a waning of their numbers and influence, with Pearlfin Village now all that is left of their people. The jinyu appear to blame the hozen for the fall of their people and have been distrustful of outsiders and at war with the hozen ever since.[15] Facing the hozen's "dirty guerilla tactics", the jinyu are outwitted by the hozen at every turn. The hozen are vastly superior on land, especially in areas with thick tree cover, but the jinyu have a strong advantage on or near water, allowing them to defend Pearlfin Village.[15] The jinyu consider the hozen "careless, filthy beasts".[16]

The source of this hatred stems from a betrayal suffered by the jinyu at the hands of the hozen during the war against the Thunder King. During the final battle against the mogu, the hozen betrayed the jinyu, believing that they would receive preferential treatment under the reign of the mogu empire. This betrayal ensured the jinyu's defeat.[17]

All pandaren emperors began their reign by consulting great jinyu elders. When Shaohao was crowned emperor, a great waterspeaker consulted the rivers and saw a vision of the Burning Legion and the Great Sundering of Kalimdor.[18]

Following the Sundering, the Monkey King went home and hurled Fu Zan into a river in a fit of rage because his friend, Emperor Shaohao, had vanished. Eventually, he went to the river to retrieve the staff, but only because those waters were sacred for a jinyu tribe, and they could not remove it themselves-it was too heavy and still belonged to the Monkey King.[19]

Fallsong Village in Krasarang Wilds was recently pillaged by the saurok and asks adventurers to recover their stolen supplies and kill the leader of the raiding party.

Some of the jinyu of Inkgill Mere were corrupted by tainted sha waters under the command of a sha-infused Elder Shai Hu. Waterspeaker Gorai asks adventurers to free what remains of his uncorrupted tribe from Shai Hu's tyranny and help him cleanse the Mere's waters.

When Garrosh Hellscream unleashed the Heart of Y'shaarj, the jinyu wardens of the underground halls became corrupted and were fought by the adventurers of the Alliance and Horde.

Several jinyu can be found in Boralus Harbor in Boralus and the Grand Bazaar in Zuldazar, selling their wares on the two islands. A hostile tribe of jinyu called the Razorfin can be found in the Rotting Mire during island expeditions. 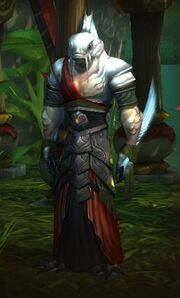 Pandaria is surrounded by and shot through with clear blue waters, and it is in these bodies of water that the amphibious jinyu flourish. In a sense, the jinyu maintain and cultivate natural water sources, even creating smaller streams with elemental magic. But the jinyu also exercise dominion over Pandaria's rivers and lakes that can bring them into conflict with other races. They regularly stop up rivers to create their homes and breeding pools, and the multifaceted dwellings they create aren't simple mud lodges – they are towns and camps that can extend beneath the water.[20]

Jinyu society is caste-based. Jinyu are chosen for their roles (such as warriors or priests) at a young age, and final say in all communal decisions is granted to the elder jinyu in a tribe. While this rigid structure can seem constricting, the elders' roles are often deserved: they can speak and listen to the waters that flow throughout Pandaria, making them extremely wise and terribly powerful.[20] Eggs are sorted early on based on the needs of the community. Many jinyu are cast as workers, diligently put to work building dams or other structures. Others are selected to be craftsmen and immediately undergo a rigid apprenticeship on hatching. Only warriors and priests are given access to the most food and finest shelters, and only the most successful of priests can ascend to the role of elder or waterspeaker. It is a taboo for the jinyu castes to intermingle.[21]

Resourcefulness is a trait admired by the jinyu.[16]

Jinyu pray over heirlooms or tokens of their dead in order to properly lay them to rest, and move on.[22] Hozen skulls are prized tokens among the jinyu. They use them to perform ceremonial rites, and the older the skull, the more potent its magic.[16]

Jinyu assassins employ the ashwing moth as both a portable decoy and a light source to reveal weak spots in their enemy's armor.[23]

Unlike the fire and heat forges of the pandaren and mogu, the jinyu have mastered the art of water forging. They shape stone and metal by using the pressures and currents of water. Originally they would scavenge for polished stone and materials in the river. They developed an eye for the places that would provide the best quality baubles and rocks. Over the ages, they have learned to manipulate water through their magics to craft exceptional edifices of the rock and stone that defy rivalry. Their weapons and armor are as hard as any forged steel, and their walls often appear to be constructed without seams.[24]

Water striders serve an important role in Jinyu culture, acting as mounts, a means of sending communications, and even family pets.[25]