John J. Keeshan, often called Johnny by old friends, is a quest giver located in various locations in the human-aligned zone of Redridge Mountains and at Flamestar Post in Burning Steppes.[28, 13]

In Battle for Azeroth he joins the Alliance expedition into Zandalar.

Before World of Warcraft

John J. Keeshan is a war veteran of the First, Second and Third Wars. He served in Bravo Company, under orders from Colonel Troteman, along with Messner, Jorgensen, Krakauer and Danforth. Keeshan served 248 consecutive tours of duty across all of the three Great Wars.[2] At some point in the wars, Keeshan's wife Jade was killed by Blackrock orcs. He started wearing her pendant after that.[3]

Corporal Keeshan first appeared as a level 25 quest giver located deep in Render's Rock in the human-aligned zone of Redridge Mountains. During the Battle of Stonewatch Keep, he was attacked by the Blackrock orcs and dragged away to Render's Rock. He was found by Alliance adventurers and escorted out of Render's Rock.[4] 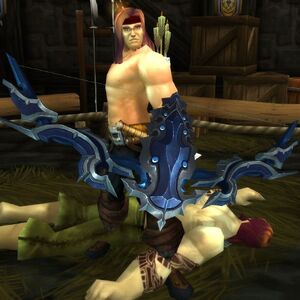 Keeshan was an orc prisoner for five years. After his rescue, Keeshan states that the townspeople of Lakeshire were "spitting on me, protesting me, calling me a baby orc killer and all kinds of vile crap". Keeshan became disillusioned with Lakeshire after being treated with contempt for his military service and refused to do anything to help out the town when it was being attacked.[5] Adventurers, under the guidance of Colonel Troteman, helped to reignite his will to fight by recovering his lost belongings and helping reassemble Bravo Company, who had all been discovered to be alive but captured by Blackrock orcs.

With his belongings returned and his friends in Bravo Company reunited with him, Keeshan regained the will to fight.[6] Keeshan led Bravo Company in an assault on Render's Valley, freeing the prisoners of war located there[7] and then decimating it in an explosion that created Render's Crater.[8]

Bravo Company then discovered from the POWs that the gnolls in Galardell Valley are being controlled by a powerful magus in the Tower of Ilgalar. After retrieving the key to its entrance from General Fangore,[9] Bravo Company confront Grand Magus Doane, who alludes to Darkblaze — the mastermind behind the invasion that Doane alludes to before teleporting away.[10]

Bravo Company later assaulted Stonewatch Keep, the stronghold of the Blackrock orcs,[11] which culminated in a battle with the black dragon, Darkblaze. During the battle all the members of Bravo Company were killed except for the adventurer and Keeshan, whom Darkblaze attempted to eat. Darkblaze flew over Lake Everstill with Keeshan in his mouth, and after some struggle, both of them fell into the lake's waters.[12] Both Keeshan and Darkblaze were presumed to have died in the fight, and though his body was never found several of Keeshan's belongings were later recovered by Lakeshire's townspeople.[13]

[Rescued Whelplings] from Whelping Downs and escorts them to Acride in exchange for his promise to provide a dragon's support in the final battle of the campaign.[24] After the Alliance champion makes deliveries to sabotage the big three leaders of Dreadmaul Rock, Troteman commences the final battle. The Dark Horde leadership within the Burning Steppes is nearly eliminated in the end, with the culmination of Troteman's plan seeing High Warlock Xi'lun unable to control the pitlord he summoned. The uncontrolled pitlord consequently wipes out most of the Blackrock forces while the adventurer uses the

[Horn of the Callers] to summon an Obsidian-Cloaked Dragon and direct its wrath to decimate 200 Blackrock Invaders.[25] With the Dark Horde's army decimated, Keeshan and the adventurer finishes the mission by eliminating the top three leaders: Thorg'izog, Dragon-Lord Neeralak, and Xi'lun.[26]

He is also one of the dozens of past characters encountered by adventurers aiding in the fight against Ragnaros' forces in Sethria's Roost on Mount Hyjal.[27]

Keeshan can be found occasionally in Lunarfall Inn in Lunarfall or in Frostwall Tavern, where he offers the dungeon daily quests

Keeshan was part of the Alliance's expedition into Nazmir on the island of Zandalar, where he helped establish Fort Victory. He had allowed his facial hair to grow out and sports a moustache and a beard with a thick goatee. After the Alliance's efforts to ally with the native blood trolls failed and the mad Captain Conrad was slain, Keeshan wanted to aim his sights higher. Whatever was next for the Alliance adventurer, Keeshan wanted to be a part of it.[28]

Keeshan later partnered with the night elf Sentinels to hunt down some Horde dark rangers in Nazmir. He was nervous around Shandris Feathermoon, thinking he was barely worthy of serving next to her because of her thousands of years of experience. Keeshan referred to Shandris as "ma'am" and figured the least he could do was keep quiet and show respect. Shandris calmed his worries by informing Keeshan that she had read an SI:7 document about his deeds in Redridge and the three wars and he was a hero in his own right.[29] He aided in the defeat of Ranger Captain Areiel, who insulted Shandris for allying with a human. Shandris believed that Areiel's views on humans were outdated.[30]

When it came time to confront the Horde san'layn Blood Prince Dreven and his allies in a tunnel between Nazmir and Vol'dun, Keeshan acted as bait as Shandris planned to seal the tunnel entrance while the san'layn were inside it, then kill them all. However, Dreven got away and Keeshan was seriously wounded. He returned to Fort Victory to recover.[31]

In Zuldazar, the forces led by Halford Wyrmbane began an operation to weaken the Zandalari harbor's defenses. Keeshan and Kelsey Steelspark planted bombs on the Breath of Pa'ku, and in the process Keeshan and Kelsey bonded over a love of collecting knives.[32] Realizing one of the Zandalari ships had a route that would take it right by the Alliance's base in Xibala, the two of them hurried to warn Wyrmbane.[33] The ship that discovered them was Gral's Call, and Keeshan was part of the forces that boarded it to kill the crew before they reported to Zuldazar.[34] Once the captain was captured and crew killed, Keeshan and Kelsey rigged the ship to explode. Seeing Kelsey's excitement at that part of the plan, Keeshan wished to speak to her later about their shared interests.[35] 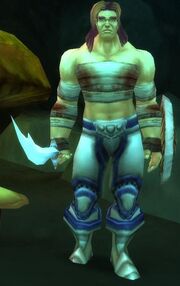 All I've ever known is war. Out here, I'm someone.

I fought in all three wars. I thought I've seen the worst Azeroth has to offer.

It's good to be fighting alongside sturdy honest Alliance soldiers again. Reminds me of the old days back in Bravo Company.

Always have your weapon ready, <name>. And keep an extra one hidden in case of capture. Someplace they won't want to search for it.