Not to be confused with Jojo. 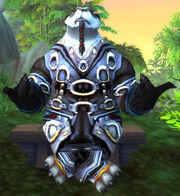 Jojo in the Wandering Isle.

Jojo Ironbrow is a pandaren monk that seems to be following the adventurer on the Wandering Isle. He displays his power in front of many pandaren onlookers by smashing things with his brow, however when a pandaren adventurer brings him

[Jade Tiger Pillar] Jojo tries to smash the pillar but does not succeed and gets a headache. After this, he keeps the pillar. When Aysa and Ji could not open a gate to the Pei-Wu Forest, Jojo charged with the pillar to the gate, opening it.[1] While in the forest, Jojo accompanies Aysa.

He, along with Aysa Cloudsinger chooses to ally with the Alliance. He is then found in the pandaren section of Stormwind City.