Jorad Mace was a former paladin in the service of Prince Arthas, before Arthas' betrayal of the Alliance. His failure to stop Prince Arthas' betrayal has led him to lose his connection to the Light. He became a mercenary for hire in Tarren Mill where his adventures with Anveena, Kalecgos, and Tyrigosa eventually led him to reconnect with the Light and become the heroic knight he was meant to be.

Jorad Mace was a former paladin in the service of Prince Arthas, before Arthas' betrayal of Lordaeron. When they first invaded, he had tried to stop the undead Scourge but failed. Having served the traitor prince and failing to slay him before he brought the Scourge to Lordaeron has haunted him ever since. The bitterness of his failure eventually caused him lose his connection to the Light. He ran from the Scourge as far as he could and collapsed, nearly perishing had he not been found by a mysterious being known as Borel. Borel helped the young paladin to survive and offered Jorad a way to redeem himself. He was sent out with the promise of contacting him at a later date. Jorad killed Scourge in the meantime but it was never enough for him and as time passed on, he lost faith in himself and started to ignore Borel's summons.

He later ventured to the safety of Tarren Mill and waited. After Tarren Mill was attacked by the Scourge and the attack repelled, he agreed to assist Kalec and Anveena find the Sunwell and the mage Borel, who helped him some times. During their adventures, he has grown close with Anveena and her draconic companions; especially with the blue dragon Tyri, who he is romantically attracted to. By aiding them in their quest to safeguard Anveena from Dar'Khan Drathir, Jorad believes that he has redeemed himself a little for his past failures. After battling against the Scourge in the peaks of Alterac, he ventured to Quel'Thalas and helped his companions as well as the blood elves to defeat Dar'Khan.[1] 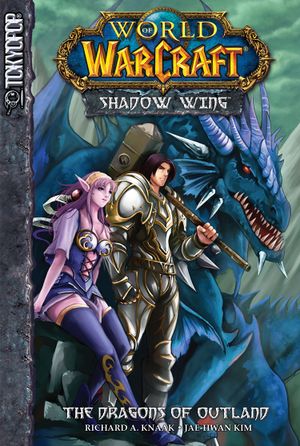 Jorad and Tyri on the cover of The Dragons of Outland.

Jorad Mace tried to find redemption by continuing to fight the Scourge but knew it was a fool's errand. Knowing that his chances of survival and defeating Arthas were slim to none, he turned his attention to other matters. Sometime later, the surviving demons of the Third War under Lord Kazzak, managed to reopen the Dark Portal and reunite with their kin on Outland. Jorad Mace went with the Silver Hand army to secure Outland from the demonic threat. While on a quest to deliver a message to Honor Hold, he was reunited once again with Tyrygosa, who was under the guise of an elven mage in the Alliance army. Tyri was drawn by some familiar yet different source of magic in Outland and came there to investigate. Tyri offered to fly him to Honor Hold but during mid flight, they were attacked by a spell from Ragnok Bloodreaver, causing them to crash land and be captured by a tribe of Broken. Tyri managed to escape but Jorad remained a captive. The Broken were distrustful of outsiders and especially dragons, as a new breed of dragonflight known as the Netherwing Dragonflight have been hunting them. Tyrygosa eventually came back in an attempt to free Jorad with new companions: Zzeraku and Valoku, but was betrayed by Zzeraku. Jorad who had gained the Broken tribe's trust, managed to convince them that Tyri was not a threat before they attacked one another.

Tyri wished to learn more about the nether dragons and investigated a nether dragon lair. Jorad and the Broken chief Warrith accompanied her but were attacked by Ragnok's fel orcs. Warrith and Jorad fell from Tyri's back, and they were again separated, leaving Warrith and Jorad to deal with their attackers. Jorad's life was saved by Warrith, who had stepped in front of an attack from a fel orc in order to protect him. Jorad's desire to protect Tyri and his friends allowed him to be found worthy by the Light again and with its power, he was able to avenge Warrith. Jorad was later transported by Valoku to the safety of Warrith's Broken tribe, to whom he recalled the events of Warrith's death and sacrifice. Valwar had theorized that his attackers were most likely minions of Ragnok Bloodreaver, a death knight who had created an army of enslaved nether dragons and fel orcs with the sole purpose of conquering Outland and Azeroth. With recent reports of Ragnok emerging victorious over the Dragonmaw clan and indicating that his forces were marching towards the Dark Portal, Jorad asked for their help in warning the Alliance forces of Ragnok's impending attack.[2]

He and Valwar were dispatched to send word to an Alliance outpost, but the soldiers were skeptical of their claims and attempted to arrest Jorad for desertion. Jorad defended his absence by saying he had important matters to attend to that benefited the Alliance and demonstrated his ability to wield the Light as evidence of his honesty and continuing loyalty to the Knights of the Silver Hand. Jorad's commanding officer, Irulon Trueblade, vouched for Jorad and urged Commander Duron to put the army on high alert. The Alliance and Horde armies at the Stair of Destiny shored up their defensive lines for the oncoming battle. Horde, Alliance, and Valwar's Broken tribe met with Ragnok's forces and engaged in battle. During the battle, a wild spell by Zzeraku destroyed the Dark Portal, stopping Ragnok's forces from getting a foothold in Azeroth.

Jorad kills an orc on a nether ray and uses the ray to get on top of the nether dragon that Ragnok was fighting on and engages Ragnok directly. Ragnok attacks Jorad with magic, but he uses the protective aura of the Light to deflect the death knight's spells. Jorad figures out that Ragnok has a device that links the control collars used to enslave the nether dragons and smashes it to pieces. After which, he calls on the Light and becomes a beacon of pure Light. Jorad calls on the Light to bring judgment on Ragnok and incinerates Ragnok with a blast of Light. With their leader dead and losing the nether dragons' support, the Alliance and Horde armies drove off the remains of Ragnok's forces.

Following the battle, Tyri takes the enthralled nether dragons to the Nexus in the hopes of freeing them from their enthrallment. When she returned to Outland, Jorad rendezvous with Tyri again, who after her failure with the nether dragons at the Nexus, decides to remain in Outland to teach and look after the next generation of nether drakes that will hatch from a new batch of nether eggs.[3]

Jorad can be seen in Netherstorm in the Burning Crusade, along with Tyrygosa (in ther elven form, Tyri). However, Jorad does not offer any quests.

Jorad joined the reborn Knights of the Silver Hand at the Sanctum of Light beneath Light's Hope Chapel during the Burning Legion's third invasion.