Jormungar are enormous worms that can be encountered in Northrend in World of Warcraft: Wrath of the Lich King. They have muscular, flattened bodies with rows of crystalline spines along either flank.

According to the frost vrykul Astrid Bjornrittar the Jormungar are the children of the titanic watcher Loken.[1] Further legends tell of the nerubians' using the jormungar as creatures of labor, forcing them to carve massive tunnels through Northrend's subterranean ice and lay the groundwork for the nerubians' ancient civilization. With the fall of the nerubian empire, swarms of rogue jormungar ran amok, drilling through the region's permafrost, attacking surface dwellers, and devouring everything in their path.[2] The jormungar no longer appear to serve the nerubians, undead or otherwise, in any capacity. However, Scourged Burrowers are similar creatures with a similar function for them.

A massive jormungar the size of Veranus attacked the group of Frostborn dwarves who had found Muradin Bronzebeard close to death. After swallowing a dwarf whole, the dwarves began to fear. Muradin, despite his wounds, became an Avatar and threw his hammer at the beast, killing it, and nearly taking its head off.[3]

A group of jormungar are eating the mountain giants of the Crystal Vice.[4] Some jormungar are tamed by the earthen to fight against the Iron Colossus.[5]

The fiercely aggressive jormungar are a marvel of evolution, possessing rows of chisel-like teeth capable of boring through solid rock, as well as muscular, flattened bodies well adapted to rapid underground navigation.[2] They have ice-cold, acidic blood which was once collected by the nerubians.[6] The jormungar have perhaps the strangest diet; they grow strong by eating the eggs of their own kind and the best eggs come from deep jormungar.[7]

Each brood has a spawnmother living deep underground. The jormungar are a nuisance best dealt with quickly. If given any quarter, they breed like hares and spread like fire.[8] There are multiple stages of jormungar: The egg sac, what the Jormungar Tunneler is, the regular jormungar (called a jormungar larva in the model flies), and the jormungar wyrm (called just a jormungar in the model files). The wyrm stage is more ruggedly featured, and partially submerged at all times (with some exceptions). Before the above bestiary entry was added, the name of the unrevealed race as a whole was "jormungar wyrm". 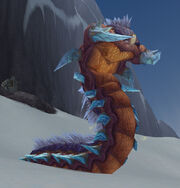 A jormungar in the Borean Tundra.

[Giant Worm Egg] has a chance to drop from the Beasts of Northrend in Trial of the Crusader.

The name is a reference to or inspired by the World Serpent of Nordic mythology, Jörmungandr, which was said to be so large that its tail had to be stuffed into its mouth to prevent it growing larger than the world. Jörmungandr was one of the three children of Loki, the mischievous Aesir God of Nordic mythology. In the quest

[80] The Slithering Darkness, Astrid Bjornrittar calls the jormungar the children of Loken, whose name is inspired by Loki.