Not to be confused with Joseph Redfield.

Joseph Redpath is a friendly level 60 human ghost found in the Eastern Plaguelands.

His ghost is involved in the quest

Joseph Redpath was killed during the battle of Darrowshire. His spirit was corrupted by Marduk Blackpool and took new shape, and this creature spread great evil in Lordaeron. At Gahrron's Withering, east of Andorhal, the corrupted Redpath was finally defeated by Alliance forces.[1]

His shield still rests near the barn of the plagued farmstead, and Scourge minions are still drawn to the memory of its evil.[2] 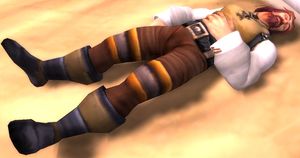 Joseph in Culling of Stratholme.

Joseph Redpath can be found sleeping in a Canopy Bed in the Road to Stratholme staying on the second floor in an inn. He is with his family including, Carlin Redpath, Pamela Redpath (along with her doll), and Marlene Redpath.

With the Argent Crusade beginning to reclaim the Eastern Plaguelands, Joseph's brother Carlin Redpath sends new adventurers to Darrowshire where they meet the ghost of his niece and Joseph's daughter, Pamela Redpath. With the aid of Joseph's hunting blade and several other artifacts, the spirits of all who participated in the Battle of Darrowshire are brought together near the town's ruins and forced to relive its events. However with the adventurer's intervention, this ghostly re-enactment turns out differently, with Redpath the Corrupted being slain shortly after his transformation. This act heals and redeems his spirit, allowing him to return to Pamela at last.

He is possibly related to Marcus Redpath.