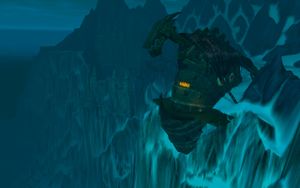 Jotunheim is a vrykul encampment located on the northwestern cliffs of Icecrown. Jotunheim is the place where the Vrykul were first reawakaned and is the second-most important place to them, the first being Ymirheim.[1] Jotunheim is ruled by Overthane Balargarde, who resides at his fortress on the cliffs above Onslaught Harbor. In this encampment vrykuls combat each other and the victor is ascended to a Ymirjar, while the loser is turned into a vargul.[2] It seems well fortified against attacks, and even has aerial defenses.[3] Jotunheim is one of the biggest Vrykul encampments in the game, and has alot of famous subzones, including Valhalas and the Underhalls.

After the Shadow Vault has been taken over by the Knights of the Ebon Blade they send the player to destroy Jotunheim. At first the player is sent to combat the vrykul at the Savage Ledge and to kill the Thane there, Thane Ufrang the Mighty.

After this the player can go on with completing the Shadow Vaults quests, which involve freeing captive Ebon Blade knights and burning vrykul banners. The player can also help the Bone Witch to wreak havoc upon Jotunheim from within. After a few quests, some daily quests involving Jotunheim become obtainable:

Jotunheim is a very large area with several smaller named areas within it. From northeast to southwest there is: Ufrang's Hall, the Savage Ledge, a path through a giant ribcage, Valhalas (with the Underhalls and its subzones behind it), Njorndar Village (the main residential area), the Halls of the Ancestors, Battlescar Spire, a series of stone plazas, Death's Rise (on the cliff wall), Balargarde Fortress, and Kul'galar Keep.

Jotunheim is named after Jötunheimr which was the "home of the Jotuns", or giants, in Norse Mythology. Also, "Jotunheimen" is a large mountain chain in Norway. "Heim" is a nordic (possibly deriving from the Norse language) word which means "home".