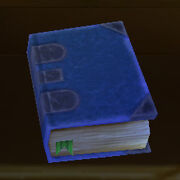 "Journal of Archmage Antonidas" is a book in Dalaran written by the former leader of the Kirin Tor, the archmage Antonidas. The journal can spawn in place of The Schools of Arcane Magic.[30.8, 46.5]

As I have said before, I am becoming increasingly disturbed by the dangerously vast potential of certain schools of magic, and the contrasting amount of laws and boundaries that should be set to limit them. Furthermore, comprehensive research on these volatile schools shows a trend of decreasing academic prerequisites yielding increasingly powerful outcomes.

A student of mine asked me today, "Why are there so many limitations on traditional portals, when Fel portals can be made twice as large and last ten times as long?" The student was not yet educated in the abstraction of what is practical versus what is achievable, yet the question held within me a certain duality: What future is there for the established practices of magic when so many wild variations threaten to overshadow them?

I do all I can to stifle studies of Fel magics and necromancy here, yet I find myself both disturbed and enthralled by their potential. I refuse to believe that that their efficiency so soundly trumps the common criticisms of being unstable or "evil" that these schools hold the monopoly of avenues for magical progress. Yet when witnessing the massive infernal for one's self, or seeing acres of land blighted at the wave of a hand, I fear my beliefs may soon shift from gospel to dogma in the minds of my peers.

My primary focus has shifted to research of the plague that ravages the north. I've canceled most of my classes to focus on research of this terrible anomaly.
With immense precaution I've procured a shipment of the infested grain. Immediately I was both impressed and suspicious with how innocuous the whole package presented itself. There was no discoloration, no discernable odor, and no variation at all from any other sheaf of grain.
At that moment it was no longer a mystery how this plague spread so quickly.

Oct 17.
Further study of the plague has yielded disturbing conclusions, and even more disturbing implications.
Initial testing showed the plague had only minor effects on non-human creatures. Symptoms ranged from fatigue, nausea, fever, to minor hallucinations, but rarely resulted in death. On human tissue, however, the plague acts uniformly and unprecedented expediency towards necrosis.

It would be foolish to think that such an efficient human killer only being found in human rations is a coincidence. While it's certainly possible that these two occurrences are unrelated, I've decided to delegate more resources towards finding the source of this plague, for I fear there are intelligent hands pushing it upon our kin.

More research must be done here at Dalaran, however, I will decide who to investigate in my stead at a later date, after some heavy deliberation.

I've stumbled upon a key factor of this plague, one so cleverly hidden in its methodology that I've come to two immutable conclusions: That its development was for the singular prupose of ending human life, and its inception was at the hands of an intelligent being.
Long term affliction of the plague causes a certain reanimation of activity in the dead. This activity is very small at first, and I disregarded it as a minor side-effect. However, this energy remained persistent and unwavering. A thought struck me, one which was both surprising and strong: The corpse was waiting for something.

At that moment I did not have any evidence to prove it, but I nonetheless spent time pursuing it. I used my limited knowledge of necromancy and casted simple curses on the corpse. At the time I had no motivation to raise the dead, only to change or distinguish the radiating energy off the corpse. Imagine my surprise when it sprung to life and attacked me.

I did not hesitate to incinerate it to dust, and I now regret doing so. But I was able to prove my unprovoked theory, that the corpse (and by extension the plague that saturates it) was indeed waiting for further commands. It's clear that those who die by this plague are only lying dormant in their graves, awaiting one skillful in necromancy to awaken them.

In short, it is indisputable that the plague is magical in nature.

I have decided to send my most trusted disciple, Jaina Proudmoore, to investigate the source of the plague. Based on my research, I believe only my skillful disciple will be able to handle the unknown challenges that await such an endeavor. She will take with her a copy of this journal and my other research documents regarding the plague. Indeed I will make it public, for all people need to become aware of this imminent threat.

I only wish I could investigate it myself, but Terenas has proved to be predictably stubborn to my requests. It is paramount that I convince him to quarantine the north. Little else matters at this point in time. Regardless, I have the fullest faith in Jaina's cunning. If she or I cannot put an end to this infestation, I doubt anyone can.