Judgment of the Black Prince

Complete the Siege of Orgrimmar and Defeat Garrosh Hellscream.

Now. To the final stage of my plan. Time to fulfill your grand purpose.

Using your newfound powers, it is time to bring this war to its conclusion. Destroy Garrosh Hellscream. Your people demand it, and future generations will sing your praises as the harbinger for the glorious new world we shall build together.

I have no reward to offer you. I have already done everything in my power to ensure that you succeed. You are on your own.

Orgrimmar! What happened in Orgrimmar?

Wrathion says: You know what needs to be done, champion.
Wrathion says: Meet me in the veiled stair when the deed is finished - assuming you're still alive when this is over. 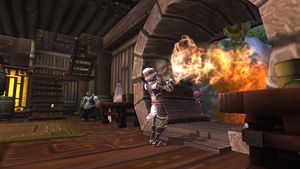 Wrathion, back at the Tavern in the Mists, is wroth! He's pacing about the main room, breathing fire, smashing glass, screaming and yelling:

When the adventurer turns in the quest, things get interesting: 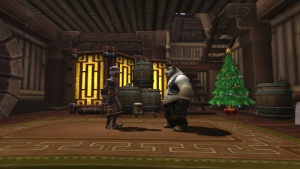 (Wrathion flies towards the Black Market Auction House and turns northeast, moving between the small mountain of rock and the building. He continues to the cliff edge over the river and despawns.)