This article is about the ship. For other uses, see Juggernaut (disambiguation). 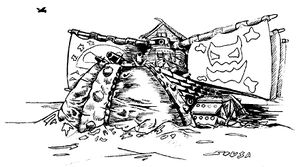 An ogre juggernaught from the Warcraft II: Tides of Darkness manual. 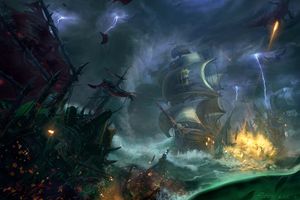 A juggernaught fights an Alliance fleet during the Second War.

These gargantuan ships of war were the main armament in the dark armada of the Horde. Heavily armed and armored, the juggernaughts were veritable floating fortresses that constituted the greatest implement of destruction within the Horde's naval forces. While not as swift as the troll warships, these ruinous crafts had quickly came to be feared across the seas of Azeroth for the unrelenting onslaught they rendered against the Alliance.[1]

The juggernaughts were built with the help of the ogres for the orcs were not a seafaring people.[5] At some point a juggernaught struck the Kul Tiran transport ship that Cyrus Crestfall and a friend of his was on.[6]

During the The Frozen Throne campaigns several shipyards sold boats according to the buyer's faction, including battleships. While sharing the same stats, the orcish battleship was actually identified as a juggernaught.

One is seen under construction by the Defias Brotherhood in Ironclad Cove of the Deadmines. However, Alliance adventurers thwarted Edwin VanCleef's plan and killed him.[7] His daughter Vanessa intended to continue his plan until her defeat, and the Horde wanted the juggernaught for itself to destroy Stormwind City.[8]

The Iron Horde constructed a powerful navy, its dreadnaughts being similar to streamlined juggernaughts.

[Crashin' Thrashin' Juggernaught] is a toy version of the ship.

The earliest of the prodigy engineers developed the phlogiston-powered boilers that allowed the goblins to replace their scout balloons with enormous zeppelins, and the Horde to take its ironclad juggernauts to sea.[9] The Horde's oceangoing juggernauts are so large or so difficult to construct that few tinkers could complete the task on their own. While untrained workers can assist by moving raw materials and handling simple tasks, multiple, skilled tinkers must combine their efforts to guide the project to timely completion.[10][11]

The Horde's navy speaks of slow and powerful warfare. Troll destroyers and orc juggernauts rule the seas, raining flaming death on anything foolish enough to combat them. However, orcs do not have as strong a navy as they used to. The trolls left the Horde after the Second War, and humans put captured orcs into enslavement camps. The Alliance dismantled orc refineries, and stripped their ships for parts. After the founding of Durotar, and the alliance with certain troll and ogre tribes, the Horde's naval power grows once again.[12]

VanCleef's most ambitious plan involves the reconstruction of a huge war machine, an ogre juggernaut from the First War. He has hired goblins to repair the ship, as it was their race that constructed the ships originally. VanCleef plans to use the ship to disrupt trade with Stormwind, thus depriving Stormwind of the riches that the city wrongfully withheld from the Stonemasons' Guild. VanCleef wants to turn the ship into a pirate ship.[13]