From Wowpedia
(Redirected from Junker gnome)
Jump to: navigation, search

This article is about the mechagnomes that inhabit Mechagon. For the allied race's page, see Mechagnome (playable). For the original titan-forged race, see mechagnome.

Mechagnomes[1][2] (previously referred to as junker gnomes by Blizzard[1][3] but not in-game) are a race of partially mechanical to fully mechanical gnomes that inhabit the island of Mechagon and are descended from the regular gnomes of Gnomeregan. They span a variety of different types. The higher-caste gnomes live in an advanced society inside a huge vault, where they previously dedicated themselves to their ruler King Mechagon. Under King Mechagon's society, the more robot parts one has, the higher one's social standing is. 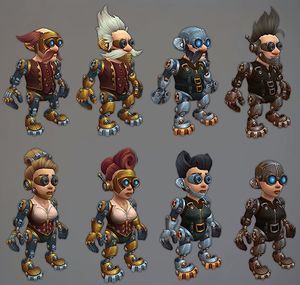 Having lived for centuries in relative peace, a group of mechagnomes rejected King Mechagon's vision of a mechanical world as his ambitions turned from invention and advancement to mechanizing the entire planet. Known as the Rustbolt Resistance, this group was led by Mechagon's own son, Erazmin. Setting up in the outside Junker Wastes, they were beset by death robots and other Mechagnomes who sought to end the resistance one way or another. The Rustbolt had fewer mechanical parts and tended to be partially deteriorating. As the Alliance and Horde arrived on Mechagon, they befriended the group in an effort to break into the mechagnomes' city and stop King Mechagon.[1][2]

Following Operation: Mechagon, the mechagnomes re-joined Gnomeregan under High Tinker Gelbin Mekkatorque and joined the Alliance. Following the ascension of Gelbin Mekkatorque as King of Gnomes with Prince Erazmin as his advisor, the goal of the Mechagnomes shifted from mechanization and removal of flesh to finding harmony between flesh and metal. [4] 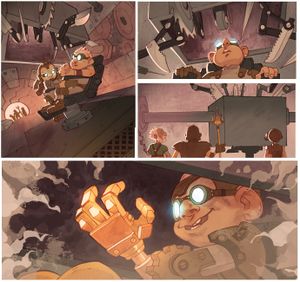 The mechanization process, as seen in Mechagon.

Some mechagnomes seem to have a mechanocat racing and customizing[5][6] subculture inspired by the American greasers, complete with sweet pompadours.

Based on the dialogue between Mechagnomes, their speech patterns are less casual than other races. They often speak imperatively, akin to stereotypes concerning robots in fiction. Their society has an extreme emphasis on upgrading and innovating, akin to regular gnomes.

Drust Stele: Conflict includes a depiction of a battle between the Drust and small beings resembling gnomes in stature. These may have been the gnomes of Kul Tiras.