Justicar Julia Celeste is a human paladin and a champion of the Order of the Silver Hand.

She is located in Sands of Nasam in the Borean Tundra. Following the death of Tirion Fordring during the Battle for Broken Shore, she moves to the Sanctum of Light beneath Light's Hope Chapel. 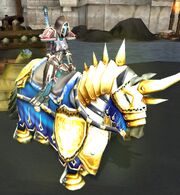 The Justicar in the Borean Tundra.

During the war against the Lich King, Justicar Julia Celeste is present as a paladin of the Valiance Expedition in the Sands of Nasam, where she fights and repels on her charger the undead nerubians, primarily Crypt Crawlers and Risen Crypt Lords, who attempt to attack the defenses of the Valiance Keep.

Following the death of Tirion Fordring during the Battle for Broken Shore, Julia Celeste moves to the Sanctum of Light where she attends the rebirth of the Knights of the Silver Hand and the ascension of its new Highlord during the third invasion of the Burning Legion.[1]

Following the discovering of the

After the Battle for the Exodar, she can be encounter alongside Vindicator Boros and Silver Hand Knights, at the Old Coast Path in Azsuna, in order to keep a close eye on Legion movements, and possibly, strike a blow at the Legion's leadership by defeating the dreadlord Balnazzar who masterminds the attacks in that region.[3] When Boros let himself be carried away by his anger and his desire for justice for all the draenei who died at the hands of the Legion, and launched the charge against all demons in lower Faronaar, she tried to stop and warn him about their lack of information on the enemy, but he didn't listen to her.[4]

Despite Boros' departure, Julia Celeste did not give up the reasons for her presence and worked with the Highlord to destroy the Legion Orbs, vital to the Legion's planning and strategy, in order to severely damage their invasion efforts. She thus learned about the existence of Balnazzar's

[Codex of Command] under the protection of the demon Jarvox who managed to capture Boros.[5] But before she could save him, she accompanied the Highlord to eliminate the imp mother named Mother Ozram, responsible for the creation of imps who keep attacking the defenses of the Silver.[6]

With the help of the Highlord, she managed to eliminate the fel lord Jarvox and reach Boros' prison to free him from the three fel locks that held him captive. She comforted the vindicator being ashamed of having let himself be guided by anger, before leaving the region with the Codex of command in direction of Light's Hope Chapel.[7]

Following the success of their mission, she claims to have heard for years stories about the deeds of the Highlord, and that after fighting by her side, she knows all the stories were true. She subsequently requested permission to represent the Order as a Champion of the light, assuring that she would fight with justice and bravery, and carry out their orders to the end. A request that was accepted by the Highlord, making her a Champion of the Order of the Silver Hand.[8]

During the battle at the Netherlight Temple, she is present with the troops of the Silver Hand who came to support the priests of the Conclave. She fought against the hordes of demons summoned by Balnazzar, until Lothraxion and the Army of the Light came and help them to eliminate the dreadlord for good.[9]

Allow me to represent the Order of the Silver Hand as a champion of the light, <name>. I will fight justly and bravely, and carry out your orders to the end.[8]