Kael'thas and the Verdant Sphere

[The Sun King's Talisman] or

Take the Verdant Sphere to

The air around you hums - a gentle hum. The naaru are aware of your victory. Perhaps they are the reason you were compelled to pick up this sphere from the still-twitching remains of Kael'thas Sunstrider. What secrets could it hold?

Perhaps A'dal in Shattrath City could make sense of the item.

<A'dal's thoughts intermingle with your own.>

The sphere... Strange. Did you know that he lived? Yes. It is here - in the sphere itself. Maimed for certain. He calls to a higher power now. No, not Illidan.

Rest. Your brothers and sisters will retake Tempest Keep now.

<A'dal hums a song of battle.> 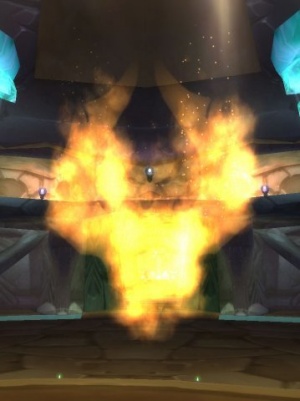 A golden translucent shape next to A'dal announces the death of Kael'thas Sunstrider...or does it?

Upon completing the quest, the following appears to everyone in Shattrath City.