From Wowpedia
(Redirected from Kairoz)
Jump to: navigation, search

"What if it were possible to shape and mold time as you would a ball of clay? What possibilities await? What new worlds could we create?"

Kairozdormu, also known as Kairoz, is a mysterious bronze dragon in high elven (Mag'hari in Draenor) disguise working with Wrathion. He first appears alongside the Timewalkers investigating the Timeless Isle, where he enlists players in helping create an artifact that can peer into other timeways. He plays a pivotal role in the events of Warlords of Draenor.

Kairoz is affiliated with a faction of discontent bronze dragons that believes they should change history to create a better future, despite having lost the power to perceive the full impact these changes could have on the timeline.[1] Kairoz believes in the motivations of the Infinite Dragonflight, but has his own viewpoint and plans independent of the Infinites, Nozdormu, or Wrathion.[2]

Kairoz first appeared at the Celestial Court, where he and a contingent of Timewalkers were carrying out an investigation on the mysterious properties of the Timeless Isle, a place where both the flow of time and causality have halted. There he befriended Wrathion and Anduin Wrynn, and tasked the player with helping him empower and refine an artifact of his own creation: the hourglass known as the

Over the following weeks, the player used the hourglass to witness visions of the Siege of Orgrimmar and two potential futures: one in which Kairoz observed the aftermath of Garrosh Hellscream's defeat from afar, and another in which Garrosh has destroyed Stormwind Harbor and murdered those who opposed his reign.

Kairoz then directed the player to use the hourglass at a crux of intersecting timeways in the cellar of the White Tiger Temple, where it showed a vision of Anduin visiting an imprisoned Garrosh. With the artifact nearly complete, Kairoz hesitantly asked the player to take the hourglass to the Caverns of Time. There, the player experienced a final vision in which Kairoz stood over the slain body of Soridormi, the prime consort of Nozdormu. Kairoz bid the player to tell no one of these potential futures lest they alter the course of time, and vowed to complete the Vision of Time to learn what the future truly holds.

The Trial of Garrosh Hellscream

After the Siege of Orgrimmar, Kairoz secretly sent a message to Zaela in Grim Batol and tasked her with gathering up Shokia, Thalen Songweaver, and Harrowmeiser. He later provided her and the Dragonmaw clan with Infinite dragon mounts.

During the trial of Garrosh Hellscream, Kairoz and his fellow bronze dragon Chronormu introduced the Vision of Time as a means of providing hard facts about past events without relying on possibly incorrect memories. Kairoz worked with Baine Bloodhoof throughout the trial, while Chromie worked with Tyrande Whisperwind.

Near the end of the trial, Kairoz tinkered with the Vision of Time in order to further Wrathion's agenda. Chromie grew suspicious of Kairoz's actions, so he locked her in a cage to prevent her from interfering. As the trial reached its end, Kairoz summoned multiple alternate timeline versions of Azeroth's heroes that fight their original counterparts, causing chaos in the Temple of the White Tiger and distracting everyone while he activated the Vision of Time and escaped with Garrosh through a time portal. This action broke the Vision of Time,[1] and Kairoz was only able to take a small fragment through the portal with him. 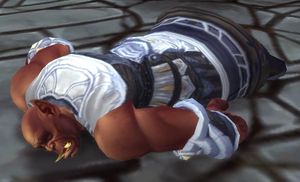 Kairoz in his orc form, lying dead in the Time-Lost Glade. 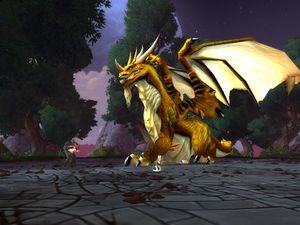 In his true form, battling Khadgar and Chromie.

Kairoz brought Garrosh to alternate Draenor, thirty-five years in the past, where they watched from a hilltop as Grommash Hellscream led a band of orcs through Nagrand.[1]

Kairoz revealed that he had brought Garrosh to a timeway similar to the past of their own, but "not a perfect mirror image." In order to blend in, he transformed himself into an orc. Believing that Azeroth isn't strong enough to take on the Burning Legion alone,[3] he explained that his plan was for Garrosh to help him gather the orcs into a new Horde and bring it to Azeroth to fight against the Legion. However, Kairoz was not satisfied with just one Horde free of demonic taint: he wanted to cultivate an infinite number of Hordes drawn from all the timeways. His fatal error came when he turned his back on Garrosh, who immediately stabbed Kairoz to death with the shard of the Vision of Time.[4]

During the war in Draenor, Kairoz's body can be found in the Time-Lost Glade in Nagrand. He is located by Chromie, Khadgar, and an adventurer; Kairoz's spirit, still thinking he is facing Garrosh, battles them, and is killed.

The following quests serve as introduction to the Timeless Isle

Each week, Kairoz tasks the players with gathering 50 Epoch Stones to empower the

[Vision of Time], and sends them to use the hourglass to reveal visions of events occurring in the present, future, or a possible alternate future.

Just look at this place! An entire ecology secluded, cut off from all known timelines!

It is rare for one such as I to be surprised by, well, anything really. I shall relish every moment I spend here.

Due to his implied involvement in the murder of Nozdormu's consort and affiliation with the group of dissenters within the Bronze dragonflight, there is a strong possibility that Kairozdormu is the catalyst that eventually leads to the creation of the Infinite dragonflight. A further piece of evidence is that shortly before Garrosh killed him, Kairoz proclaimed: "We will be limited by nothing. Not even time. The possibilities are infinite. I will become infinite—"

Micky Neilson clarified that Kairoz is a believer in what the Infinite dragonflight was even if it's not around. He has his own viewpoint more so than anything involving the Infinites or Nozdormu.[2]

As Kairoz stated that there is a traitor among his allies,[6] he was probably speaking about himself in the future as he released Garrosh Hellscream from his trial.