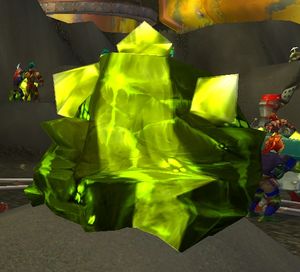 Kaja'mite is a type of ore found primarily beneath Mount Kajaro on Kezan. It can also be found on the Lost Isles and Zandalar.[1] The consumption of vaporized kaja'mite causes a range of effects, such as heightened senses, hallucinations and increased intelligence.[2]

By goblin law, all Kaja'mite belongs to goblins.[3]

In ancient times, the keeper Mimiron had discovered kaja'mite and, attempting to determinate its properties, he experimented on various races. He found that the ore was extremely potent and that it increased the intellect of his subjects. One of these subjects was a small primitive race that roamed around the forests near Ulduar. By consuming kaja'mite, they were transformed into a new, highly intelligent race known as the goblins. However, when the Great Sundering happened thousands of years after the goblins' creation, they were cut from the supply of the ore. In just a few short generations, most changes and boosts to their intelligence vanished. The goblins then took refuge on the isle of Kezan and they had already forgotten the influence kaja'mite once had on their society.[4]

The Zandalari use kaja'mite for their rituals. Early in their history, the goblins were forced to mine it by the Zandalari who came to Kezan, desiring the mineral for their complex rituals. However, its magic gave them great intelligence and the goblins overthrew the trolls one hundred years before the opening of the Dark Portal. Eventually, however, kaja'mite supplies ran low, and as the goblins' intelligence dwindled, their inventions became increasingly unreliable. As a result, the goblins turned to mercantilism as a source of income and transformed Kezan into a profitable trading hub after years of cartel wars.[5]

A goblin player character starts out owning a kaja'mite mine called Kaja'mine with troll slaves as workers. The kaja'mite is turned into an idea-inducing beverage known as

A kaja'mite mine is located on the Lost Isles and is mined by a group of intelligent monkeys. Some of the monkeys have been enslaved by pygmies. Later, Jastor Gallywix enslaves his own Bilgewater Cartel to mine the kaja'mite on the isles before he is stopped by the Horde and goblin player.

After the goblins reach Azshara, Kaja'mite is no longer a plot point. Although the lack of mention of Kaja'mite after the goblin starting experience could illustrate the short supply status of the substance.

Following the Argus Campaign, during a conversation between Sylvanas and Jastor Gallywix, the warchief told the goblin leader that she was aware there was no more kaja'mite.[6]

When the goblins of the Bilgewater Cartel first arrived on Zandalar, they got word of the Zandalari's old kaja'mite quarry at Gorilla Gorge near the Village in the Vines and immediately made their way to it.[1] The Zandalari stopped mining kaja'mite at the quarry because of intelligent gorillas, a result of the kaja'mite.[7]

Kaja'mite is a strange ore with magical powers that is named after Mount Kajaro. The goblin's capital city of Undermine was likely declared so because it was the mine that contained the vital kaja'mite. The goblins searched fruitlessly for more deposits of kaja'mite all over the world for thousands of years. Goblin intelligence peaked about 500 years before the First War, and has been declining ever since.[8]