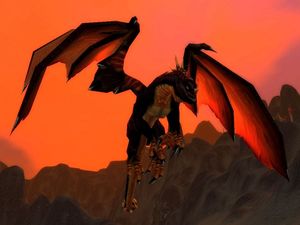 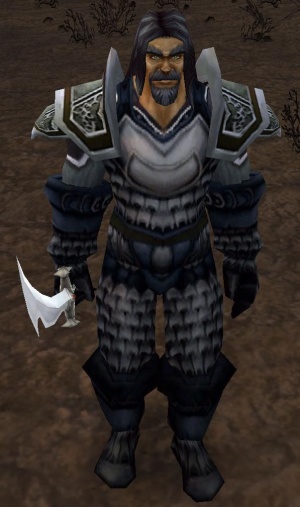 Kalaran is a drake of the black dragonflight. His humanoid form is a human male named Kalaran Windblade.

As Kalaran Windblade, Kalaran was a level 55 quest giver located southeast of Thorium Point in the Searing Gorge. He told a (fabricated) tale of his father's slaughter at the hands of the Dark Iron dwarves and urged adventurers who crossed his path to help him avenge his father's death.

When his quests were completed, he assumed his true form of Kalaran the Deceiver before flying off to Blackrock Mountain. As a reward to the adventurers, he did not kill them, instead commanding his servant to give them "trinkets".

After the invasion of Outland, Kalaran Windblade posed as a spy in the service of Ironforge against the Dark Iron dwarves. When the missing King Varian Wrynn, who went by the name Lo'Gosh, appeared at the Gates of Ironforge, Kalaran attempted to assassinate him but was stopped by Valeera Sanguinar. In his anger, Kalaran revealed his true form before being chased off by King Varian.[2]

Following Nyxondra's escape from captivity, she called for help from the rest of the Black dragonflight to help hunt down Rheastrasza and the

[Purified Black Dragon Egg]. Kalaran responded to the call, leading a vanguard of black whelps and Darkflight Soldiers.[3] He arrives in the Badlands in his drake form, this time going by the name of Kalaran the Annihilator. He was eventually killed on Rhea's orders by Horde and Alliance mercenaries.[1]