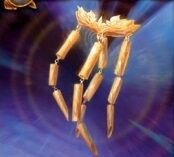 The Kaldorei Wind Chimes are a rare archaeology artifact that requires 225 skill to find and 98 Night Elf Archaeology Fragments to solve. Up to three

Activating this item plays a wind chimes sound and displays an emote:

When activated during a zone's rain weather cycle, the emote changes to:

When activated during a zone's snow weather cycle, the emote changes to:

There is something unusual about these bronze tubes. You detect a hint of magic that still resides within. When placed near each other or even within your pack, the fragments of the tubes seem to move closer to each other.

These chimes are composed of a series of richly decorated bronze tubes of varying lengths connected to a strand of bronze designed to appear as a vine. This artifact is magical, and the chimes appear to play music of their own accord, even when there is no wind.