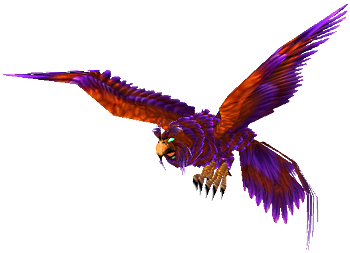 Kaliri are a magnificent species of bird bred by the arakkoa[1] as their attack pets and guardians.[2] The females tend to be more rare than the males.[3] Hunted to near extinction for its feathers, the kaliri has developed keen senses.[4]

Kaliri take flight immediately after hatching.[5] Kaliri hatchlings feast on grubs when they're young, and eventually graduate to anything smaller than themselves.[6] Apparently, unlike other birds, kaliri mothers don't chew their hatchlings' food for them.[7]

Terokk's minions have been attempting to corrupt these birds before they hatch, which would make them mindlessly serve Terokk.[8] Corrupted kaliri can often be found where Terokk's minions are found. Heroes have been sent to Veil Lithic, where these rituals seem to take place, to destroy the eggs.

The kaliri are the children of Rukhmar, as the dread ravens are to Anzu and the wind serpents were to Sethe.[9] In fact, the arakkoa were created when Rukhmar transformed several of her kaliri followers using her own life essence.[10] Legend says the sunfire kaliri flies into the sun itself when it is ready to die.[11] 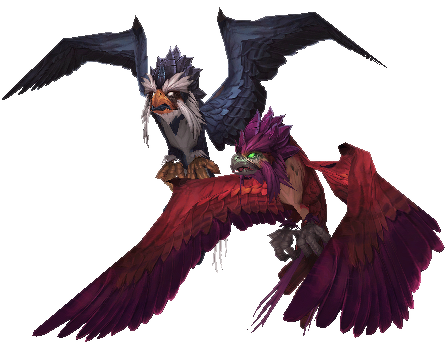 Since the kaliri have been domesticated by the arakkoa and used as pets, it's unclear why they would need to be corrupted to serve the arakkoa that are loyal to Terokk. It's possible they can sense the evil and choose not to serve Terokk's minions.

Grishna Falconwing have an ability to summon a "Grishna Kaliri" as a guardian pet, however, the bird appears as a raven and is even named Grishna Raven. The spell name is probably an error, though it could also imply a link between the raven and Kaliri, like one being a more corrupted version of the other.