For the temple from the main universe, see Black Temple.

Karabor is a draenei temple, one of their most holy sites, and the home of the Prophet Velen. It stands as the draenei capital and splits into the Coliseum of Light, the Gardens of Eternity, the K'arani Terrace, Karabor Harbor, the Path of the Light, and the Tranquil Court.

During the events of the Iron Horde, Karabor became a hot spot for Grommash Hellscream's conquest of Draenor. As such, he assigned Commander Vorka to lead the attack from the Harbor. To ensure victory, Ner'zhul planned to summon the Dark Star to dismantle the defenses and take out the draenei's most powerful constructs. Should these events come to be, Karabor would have fallen for sure. Fortunately, Velen prevented this fate by sacrificing himself to purify the Dark Star. The Iron Horde attack failed.

In the aftermath of the battle, the city is littered with corpses. The draenei peacekeepers burn the bodies of their allies and enemies. The rest of the city returned to its normal state. 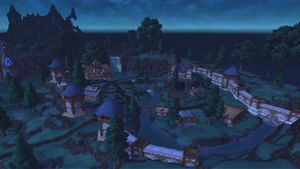 An early beta version of Lunarfall and Karabor.

It is possible that Karabor was named after the naaru K'ara, specially since one of its regions is called the K'arani Terrace.