Karazhan (a.k.a. Medivh's Tower)[1] is an abandoned citadel (or castle)[2] located on a nexus of ley lines[3] in southern Deadwind Pass. The tower is best known for its last known occupant — Medivh, the last Guardian of Tirisfal. After Medivh was killed by Khadgar, Lothar and Garona, the tower sealed itself off from the rest of the world. But recently, Karazhan has reawakened — an evil presence has taken the tower as its own, its halls crawling with spirits and demons, and Medivh's presence is still alive and well, even decades after his death.

Karazhan, as a level 70 ten-man raid instance, was opened in World of Warcraft: The Burning Crusade. The instance is huge, scripted, and non-winged, containing twelve boss encounters, with 22 different NPCs.

The land which the tower sits on "was similar in shape to a human skull. Many had noted it over the years, though only a few had been sufficiently brave, or powerful, or tactless to mention it to the property's owner".[4]

Karazhan's history begins with an explosion that carved out Deadwind Pass and weakened the fabric of reality in the region,[5] which was caused by Sataiel draining the land of life with

[Ulthalesh, the Deadwind Harvester].[6] The tower was built in secret by the Guardian Aegwynn using

[Aluneth][7] around 600 years before the First War, after she grew increasingly paranoid and hostile to her fellow members in the Council of Tirisfal — a result of the dark influence that the spirit of Sargeras was exerting over her. The tower acted both as a refuge from the council and as a conduit for the potent ley lines in the region, through which Aegwynn could siphon power as needed.[8] Aegwynn's son Medivh eventually took up residence in Karazhan, but mused that the explosion and the construction only happened because he would eventually arrive.[9]

As the structure was built atop a nexus of potent ley lines, the energies that coursed through Karazhan sometimes warped reality in the region. Because of that, the mage Arrexis came to Deadwind Pass to study the tower and its powers, experimenting with their warding magics outside Karazhan, attempting to neutralize the tower's strange powers.[10] 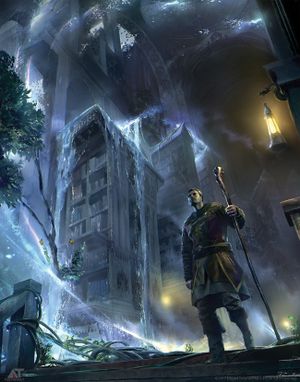 Khadgar seeing a vision while in Karazhan.

During the First War, the tower was inhabited by Medivh, his steward Moroes, his cook named Cook, and his then-apprentice Khadgar. Though Medivh was the greatest wizard of his day (and humanity's intended custodian) Medivh was secretly possessed by the dark spirit of Sargeras, the Destroyer of Worlds. Through Medivh, Sargeras opened the Dark Portal and allowed the orcs to wage war upon the kingdoms of Azeroth. Garona Halforcen also resided here as an emissary at the same time as Khadgar's apprenticeship. Sargeras allowed Medivh to freely explore Karazhan. As a result of the region's weakened reality, many strange and disturbing visions lurked within the tower, and Moroes was known for wearing blinders to avoid seeing them. The visions were ultimately ended when most of Karazhan's ambient magical power was absorbed by the resurrected Medivh, reducing it to "a pile of stone in the remote reaches", its power taken to serve the Prophet.[11]

As the war progressed, Medivh fought against Sargeras' control. The raging conflict within him finally drove the wizard irrevocably insane, until his childhood friend, Anduin Lothar, aided Medivh's young apprentice, Khadgar, in storming Karazhan and slaying their former comrade. Since that day, a terrible curse has pervaded both the tower and the lands around it - casting a dark pall over Deadwind Pass and the region that is now known as Duskwood.

After the fall of Karazhan, the Kirin Tor dispatched an assembly of mages to search the tower and seize all items of import for the purposes of "research." It was then that Atiesh was discovered and brought back to Dalaran.[12]

After the Second War an area, which would later be known as Duskwood and the town of Grand Hamlet (later known as Darkshire), became darkened and surrounded by dark creatures. The people of Grand Hamlet thought the evil was caused by the tower of Karazhan. Several townsfolk ventured there to investigate the tower but they did not return. A paladin named Dougan along with his friends Kardan and Voldana entered the tower but the raid failed and resulted in the death of Dougan. While there, time seemed to unfold in strange ways for the trio.

Kardan and Voldana managed to escape, but Dougan did not and was killed inside. He would later discover that anyone who dies inside Karazhan will have their spirit trapped there, unable to escape.[13]

Years later, Dougan's daughters, Lieren and Loania teleported into the tower only to find the horrors of its curse. Having escaped from Moroes, they found the killer of their father, satyr Terestian Illhoof. They killed him but Loania was hurt. As they were trying to leave they found the ghost of Nielas Aran who tried to kill them. Loania summoned Dougan who protected them while the horrors went after them. The twins teleported out of the Karazhan, leaving Dougan still trapped there.[14] 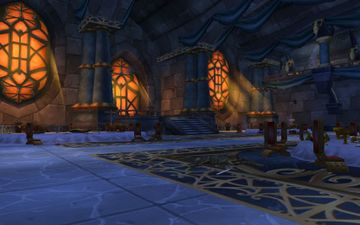 In recent years, nobles of Darkshire ventured into Deadwind Pass to investigate the blight that had settled over the region. None who entered the dark tower ever emerged.[15]

Recently, despite Medivh's absence and the draining of magic, a new power seems to have made its home in Karazhan. The Dark Riders of Deadwind Pass, though rarely seen, have a connection to Karazhan. However, no one knows who their master is. One recent sighting is cause for concern — the Dark Riders seek the Scythe of Elune, a powerful artifact with the ability to summon the vile worgen into this world.

If you traced the ley lines traversing Azeroth, you would find they all converge under Karazhan.[16] However, this is no longer true after Malygos redirected Azeroth's ley lines to the Nexus.

Worldofwarcraft.com says the following about Karazhan:

The decrepit tower of Karazhan once housed one of the greatest powers Azeroth has ever known: the sorcerer Medivh. Since his death, a terrible curse has pervaded the tower and the surrounding lands. The spirits of nobles from nearby Darkshire reportedly walk its halls, suffering a fate worse than death for their curiosity. More dangerous spirits wait within Medivh's study, for it was there that he summoned demonic entities to do his bidding. However, the brave and foolish are still relentlessly drawn to Karazhan, tempted by rumors of unspeakable secrets and powerful treasures. Forge a group of ten stalwart heroes, and journey to the tower in Deadwind Pass — but be warned that only those who have achieved level 70 should dare enter. 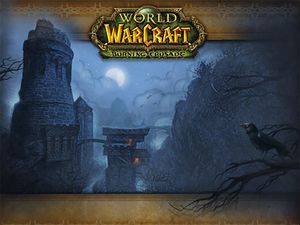 At some point, the tower of Karazhan had sealed itself and several agents of the Eye were trapped there.[17] Mages of The Violet Eye has been guarding and examining the tower and its secrets.[18] Before the closing, demonic agents of the Burning Legion arrived to Karazhan as it is a portal to the Nether.[19]

With Khadgar's help, the mages unlocked Karazhan and the adventurers of the Horde and Alliance raided the tower, defeating its ghostly inhabitants.

During the second Scourge Invasion, Med'an, Medivh's son, entered the tower and met with the avatar of his father who told him about his history.[20]

Later, Karazhan was infiltrated by Tenris Mirkblood, an elven prince of the Scourge. The Argent Dawn sent Alliance and Horde heroes to kill him and learn Lich King's orders.[21]

Around the time of Shattering, a group of soldiers from the Night Watch militia led by Althea Ebonlocke along with Karlain, Mardigan, Revil Kost and Brink attacked the Dark Riders in Duskwood only to be teleported to Karazhan by one of the Dark Riders. While Karlain and Mardigan were watching a cursed vision in the Opera House, the rest battled against the Curator. Brink then found an amulet which he used to return their enemies and the Night Watch back in time preventing the events leading them to engage in battle. Brink and Revil then regrouped with Karlain and Mardigan in the Opera House, witnessing the true vision of Aredhel's death. After this, they teleported out of the cursed tower.[22] 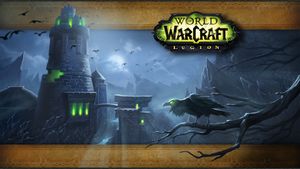 After witnessing the return of the Burning Legion, Khadgar entered Karazhan in order to find knowledge against the demons. He was approached by the spirit of Medivh who said that it is time to fulfill his destiny by becoming Azeroth's next Guardian. Khadgar refused and the spirit revealed himself to be, in fact, a dreadlord in disguise. The archmage defeated him stating that Karazhan will not become a stand for the demons.[23]

Later, after learning of the Pillars of Creation from Magni Bronzebeard in Ulduar, Khadgar returns to Karazhan with an adventurer to find their location, as knowledge of the pillars had been entrusted to the Guardian of Tirisfal. But Khadgar's reminiscing about his apprenticeship years ago is interrupted when an echo of Medivh himself interferes and brings down Khadgar's wards around the tower, allowing the Burning Legion to invade and try to stop them from finding the Pillars' location. Khadgar is able to alter the tower's defenders to fight off the Burning Legion while he and the adventurer retrieve a book authored by Alodi, the first Guardian, which contains information on the Pillars of Creation.[24]

By this time, Khadgar considers the Guardian's Library at the least to be his.[25]

Some time later, Moroes has been overlooking the neighborhood of Karazhan, and noticed the forces of Burning Legion marching towards Karazhan, which he saw as an omen heralding the return of Medivh. He invited them into the tower. The Legion intended to use the tower as a conduit to each and every one of the countless worlds that they had consumed during their Burning Crusade, but Medivh severed the connection between Karazhan and those worlds.[26]

After the Argus Campaign, Khadgar returned here.[27] Magni later visited him and, studying the tomes here, they came up with a plan to destabilize the Sword of Sargeras in Silithus: The Wound.[28]

Karazhan is also known as the Ivory Tower of Karazhan or Ivory Spire of Karazhan.[29] 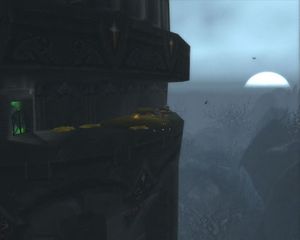