Kargath was at its time the only Horde outpost in Khaz Modan, named after the Shattered Hand clan chieftain Kargath Bladefist.

Kargath's flight path was very important because it linked the northern and the southern areas of Horde flight paths on the Eastern Kingdoms. It linked Hammerfall and the Undercity in the north to Grom'Gol, Booty Bay, and Stonard in the south.

On the orders of Warchief Thrall himself, the Kargath Expeditionary Force made frequent excursions into the arid landscape of the Badlands. Exploration of the land revealed Uldaman, an excavation site that seemed to be of high interest to the dwarves, and Horde forces were sent to investigate the secrets the dwarves valued so highly. Yet the Expeditionary Force's primary goal was to secure a route through the Searing Gorge to Blackrock Mountain (so as to assault the Warchief of the Dark Horde, Rend Blackhand). In doing so the Horde inadvertently clashed with the Dark Iron dwarves once again. 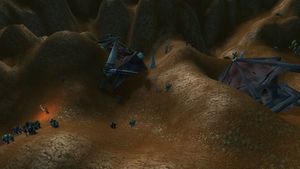 Kargath was destroyed by a landslide during the Cataclysm. However most of Kargath's residents are still present in a newly rebuilt and fortified town very close by, in the area near Apocryphan's Rest.

Kargath is a small, functional Horde base where orcs and their allies regroup and resupply when adventuring into the Badlands. The orcs within are strong and noble, and they welcome any good soul who enters, whether Horde or Alliance. The old orc Gorn runs this enclave, located in the northwest of the region. Gorn and his warriors keep tabs on the renegade orcs in the eastern lands — remnants of the Blackrock clan in the southern Redridge Mountains, and Dragonmaw clan in the northern Wetlands. He aims to wipe out the remaining evil orcs and bolster the Alliance's confidence in the Horde.[1][2]