This article is about Kargath's biography in the original timeline. For other uses and appearances, see Kargath Bladefist (disambiguation).

Kargath Bladefist was the Warchief of the Fel Horde and Chieftain and founder of the Shattered Hand clan. He earned the sobriquet "Bladefist" after he cut off his left hand to escape ogre captivity, replacing it with a deadly scythe called the

[The Bladefist],[1] and becoming the Chieftain of the Shattered Hand.

Kargath Bladefist was raised a slave by the ogres of Gorian Empire. He was imprisoned and held beneath Highmaul for many years. Striving for his own freedom, he became a gladiator fighting in the Highmaul arena. The price to earn his own freedom was to take one hundred orcish lives while fighting in the arena. Having won every battle against his opponents, Kargath marched out of Highmaul, only to discover the promise of freedom to be a lie. Kargath was thrown in a dungeon beneath the arena, and desperately severed his hand, which was bound by shackles, in frustration and rage. The other orc slaves, seeing his resolve, followed in his footsteps and did the same. They followed Kargath in his uprising against the ogres and helped him slay the emperor. Kargath showed the severed head of the emperor to his followers, and they raised their severed hands, armed with blades, cheering at him. This moment marked the birth of the Shattered Hand clan.[2]

Kargath led his new clan to establish a village within the dense, swampy forests of the Spires of Arak called Bladefist Hold. Much like the rest of his clan, he took great pleasure in causing pain to others, and to himself. Based on his alternate counterpart's actions, it can be presumed that the Shattered Hand's relations with the local arakkoa were... less than peaceful. 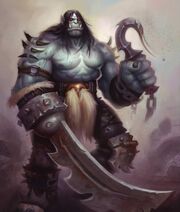 Kargath was present at the Kosh'harg celebration in Nagrand.[3] He would later become one of the original members of the Shadow Council, albeit as a non-warlock. As part of the council, he watched over the alliance with ogres and rebellious clans.[4][5]

After the destruction of Shattrath City, Warchief Blackhand ordered Kargath to exterminate the high arakkoa in his clan's territory, the Spires of Arak, for their superweapon was a threat to the Horde. Kargath's army consisted of his Shattered Hand, the Burning Blade, and the Dragonmaw. They stormed the forests near Skyreach but were not prepared for the arakkoa's weaponry. The searing beam of fire that lanced across the forests incinerated dozens of orcs where they stood. Rather than mount another direct assault, Kargath sought out allies in the cursed Arakkoa Outcasts and struck a bargain: if the arakkoa infiltrated Skyreach and destroyed the weaponry, the orcs would join the fight and slaughter the high arakkoa. Then, the Outcasts could take Skyreach.

Enticed by the offer, the Outcasts snuck into Skyreach and waged war on the city. What they lacked in numbers they made up for with their magic and destroyed the mechanism atop the city. A blinding explosion tore through the sky and set the heavens aflame. When Kargath and his forces finally arrived, they slaughtered the high arakkoa as promised and cast their bodies from the city. However, the battle-crazed orcs also turned on the Outcasts. Kargath saw them as a threat. Knowing they were cunning and intelligent, he assumed they would one day learn to wield the same powers the high arakkoa had and he could not take that risk. But in addition, he simply enjoyed betraying the wretches. Kargath's followers did not kill every high arakkoa they came across. Some were taken prisoner and cast into the Sethekk Hollow based on stories the Outcasts had told them. Kargath reveled in the sight of the last of the high arakkoa writhing in agony as shadow energy transformed them. In the end, the Horde's assault on the Spires of Arak destroyed high arakkoan civilization and killed nearly all of the Outcasts.[6]

When the first wave of clans went through to Azeroth, Bladefist begrudgingly stayed behind in Draenor, under the uneasy rule of Ner'zhul the Shaman, who only remained in power through his numbers – and the always-looming threat of the ogre mage Dentarg. When the Bleeding Hollow clan returned to Draenor many years later, Bladefist immediately volunteered to send his clan through to Azeroth,[7] hoping to gloriously slaughter the humans to avenge his fallen or captured brothers and sisters.

He alongside Grommash Hellscream were the first to hear and join Ner'zhul's plan. Once the Alliance had invaded Draenor, they established a foothold and constructed Honor Hold. From there, they raided Hellfire Citadel, thinking that Ner'zhul resided there. However, Kargath and Dentarg had been left there to distract the Alliance while Ner'zhul attempted to open the rifts to other worlds at the Black Temple. Alleria's elven rangers killed the sentries of the citadel and opened the gates, allowing the Alliance to storm in and butcher most of Kargath's clan. Dentarg was destroyed by Khadgar in that fateful battle. Nonetheless, Kargath understood that he had been left there to die, and managed to pull a few of his forces back and escape. Hoping to intercept the Alliance and continue his service to the Horde, he traveled to Nagrand and attempted to convince Greatmother Geyah to lend him warriors. She refused his request, as the village was one of the sick. Angered, Kargath stormed off. Realizing that he had too few soldiers to make a difference, he instead decided to abandon the struggle and reclaim Hellfire Citadel one day in the future, when he was stronger and more prepared.[8]

Kargath in World of Warcraft.

It appears that at some point Kargath became a fel orc and replaced his other hand with a sword-like weapon, as did many of his fellow fel orcs. Kargath fulfilled his promise to reclaim Hellfire Citadel, becoming Warchief of the Fel Horde, overseeing Magtheridon. Now Kargath's prisoner, Magtheridon supplied Illidan's forces with Pit Lord blood to create stronger Fel Orcs. When the invasion of Outland started, Kargath found his reclaimed citadel under siege again. He eventually met his demise within the heart of the Shattered Halls. His prisoner and weapon, Magtheridon, was slain as well, ending the threat that the Fel Horde posed under Kargath.

From the Warcraft II: Beyond the Dark Portal manual: A razor-sharp scythe setting in place of his severed left hand, Kargath is always willing to engage in frenzied combat. His ruthless tactics and single-mindedness have earned him the Chieftainship of the feared Shattered Hand clan. Like Hellscream, Kargath waits only for the time his clan is unleashed upon the unsuspecting humans to engage in massive bloodshed.[7]

In the canceled Warcraft Adventures, he was depicted as looking much younger than in Beyond the Dark Portal and as having crossed through the Dark Portal before it was destroyed by Khadgar. He was one of the clan leaders, along with Orgrim Doomhammer and Kilrogg Deadeye, that met at a convocation at Grim Batol, lamenting that the Horde couldn't use dragons anymore.

There are currently no sources stating the exact time of when exactly Kargath and his Shattered Hand orcs became fel orcs. It could be either when Magtheridon took control of Outland or during the reign of Illidan Stormrage.