This article is about Kargath's biography in the alternate (Warlords of Draenor) timeline. For other uses and appearances, see Kargath Bladefist (disambiguation).

"Do not fear pain. Embrace it. Use it. Then no one can stand against you."

Kargath Bladefist is the Warlord of the Shattered Hand clan, which operates mainly in Spires of Arak and Talador. He later appears in Highmaul arena as a gladiator, having returned to the place where he rose to prominence and fame.

Unbound by the shackles of self-restraint, Kargath performs monstrous acts of violence, and he enjoys every moment. As members of the Iron Horde, Kargath and the Shattered Hand clan wield their cruelty with abandon. They don't just dominate; they spread agony wherever they can. In order to join the clan, new members must prove their zeal by demonstrating their readiness to cause pain—including their own. The unbridled depravity of the Shattered Hand makes Kargath one of the least predictable warlords, and one of the most difficult to control. If he is willing to butcher his hand in exchange for freedom, imagine what lies in store for his enemies.[2]

Kargath Bladefist was raised a slave by the ogres of Gorian Empire. He was imprisoned and held beneath Highmaul for many years. Striving for his own freedom, he became a gladiator fighting in the Highmaul arena. The price to earn his own freedom was to take one hundred orcish lives while fighting in the arena. Having won every battle against his opponents, Kargath marched out of Highmaul, only to discover the promise of freedom to be a lie. Kargath was thrown in a dungeon beneath the arena, and desperately severed his hand, which was bound by shackles, in frustration and rage. The other orc slaves, seeing his resolve, followed in his footsteps and did the same. They followed Kargath in his uprising against the ogres and helped him slay the emperor. Kargath showed the severed head of the emperor to his followers, and they raised their severed hands, armed with blades, cheering at him. This moment marked the birth of the Shattered Hand clan.[3] 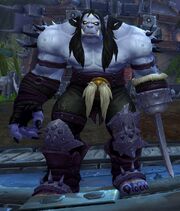 Now, he leads an army of sadists simply by being the most hate-filled orc to ever attach a scythe to the stump of his severed wrist. Initiates of Kargath’s clan, the Shattered Hand, emulate their chieftain’s vicious body modification, but it’s only the first of many opportunities for new scars, both on their own bodies and in the sculpting clay of their foes’ flesh.[4]

After the Dark Portal was disabled, Khadgar and his group entered an arena in Kargathar Proving Grounds where he wanted to have them kill 100 of his orcs. Near the end of the battle, Khadgar froze the orcs and ran through the camp, Kargath behind them. Azerothians entered a cave and the arcimage collapsed the entrance. Later, he was seen on the same cliff with Grommash Hellscream and the other warlords as Grommash ordered the combined might of the Iron Horde army to head after the Alliance and Horde attackers.

Kargath is next seen in Bladefist Hold in Spires of Arak, where he is supervising a number of Shattered Hand gladiators. After the adventurer kills his men, currently channeling the spirit of Terokk, Kargath fights them himself, having a short skirmish with them that eventually ends with him grabbing the adventurer by the throat and forcibly disconnecting them from Terokk. The adventurer is however, quickly transported back to Veil Terokk before the Shattered Hand chieftain can do any further harm to them.

He is later seen at Warlord's meeting in Mok'gol Watchpost.

Kargath later appears in the stands of the Gladiator's ring in Highmaul alongside Warchief Hellscream, witnessing adventurers fight and quickly dispose of Vul'gor. Upon Vul'gor's demise, he drops down into the arena claiming the crowd deserves a superior gladiator (whether this was at Hellscream's request, as a favor to Imperator Mar'gok, or simply out of his own pride is unclear). As a result, he becomes the first boss in the instance. Fighting brutally and to his last breath in the ring where he was born, Kargath is killed by adventurers, his last words calling back to the arena brawl in Tanaan Jungle (the 100th kill being, ironically, himself). His blade-fist is severed after his death, and it can be looted from his corpse.

"Do not fear pain. Embrace it. Use it. Then no one can stand against you."

Unlike most uncorrupted orcs, Kargath has a rather pale grayish skintone, similar to the skintone of the Blackrock orcs. Though Kargath had no clan,[6] he may be descendent from Blackrocks.

Alternatively, the gray skin may have been caused by him being imprisoned in dungeon as he is said to be raised as a slave.