From Wowpedia
(Redirected from Karlain)
Jump to: navigation, search

Archmage Karlain is a human alchemist, mage and a current member of the Council of Six, the ruling body of Dalaran. Once at the mercy of his emotions, Karlain had learned to master them. Few are as controlled and thoughtful as he.[1]

Before becoming a part of the Kirin Tor, Karlain was a mage of renown. One man who sought to be his apprentice attempted to rape his wife Aredhel. Karlain fought him off, but his anger got the better of him and he killed Aredhel as well. With his infant son Mardigan, he moved from Dalaran to Goldshire in Elwynn Forest and Karlain swore he would never let his anger get the better of him again.

After scolding Mardigan for his hooliganism in a bar, Karlain traveled to the Tower of Azora. There, Theocritus told him to protect one of his colleagues, Tannos, who was keeping a secret artifact, later revealed to be the Hand of Azora, and keep it safe from the Dark Riders that are after it.

Karlain arrives in Westfall where the guards of the People's Militia ask him to deal with an annoying priest. He is then introduced to Revil Kost, a wandering priest also looking for an artifact. Considering that the Dark Riders were acquiring artifacts, Karlain proposed that they join forces as their missing artifacts may be targeted by the same group. The two were directed to the Gold Coast Quarry where Tannos' patrol was located. When they rendezvoused with Tannos, the entire party was attacked by the Defias Brotherhood. After using the Hand of Azora on the Defias, the Dark Riders rode in, cleaving off Tannos' hand to retrieve the artifact and finishing him off by beheading him. While Revil took a horse to pursue the Dark Riders, Karlain went back to Elwynn to report Tannos' death to Theocritus.

Back in Goldshire, he discovers his home desecrated and his son Mardigan missing. Marshal Dughan informs him that Mardigan is wanted for the murder of the stranger he fought earlier. With so much damning evidence, Karlain was unsure of his son’s innocence. He returned to the Tower of Azora to discuss the recent events with his friend Theocritus. With Theocritus’ urging, Karlain used the Eye of Azora to discover that his son has traveled to Darkshire.

Karlain traveled in pursuit. The Night Watch Militia he questioned revealed that his son had been in Darkshire, questioning them about the Wolf Cult but has disappeared while investigating his leads. Just then, the Night Watch received a report of Dark Riders at Manor Mistmantle. To Karlain’s surprise, Revil has also been working with the Night Watch to catch the Dark Riders and the Wolf Cult his son is pursuing. The two investigate Manor Mistmantle and spy on the worgen there who claim to have found the Scythe of Elune. They were then attacked in surprise by a wandering worgen but was saved by Ambrose, a member of the Night Watch. With his aid the three decide to take the fight to the worgen party. After dispatching many of the vile creatures, Karlain subdues one to interrogate it for the location of his son. After discovering that Mardigan was being transported to Roland's Doom, a cave by the Tranquil Gardens Cemetery. Revil killed the worgen and the three made their way to the cave but they encountered a man name Jitters who frantically warned them to turn away. Though the man was too shaken up to give out too much details, they did discover that the Scythe of Elune had been discovered and that it is linked both to the Dark Riders and the Wolf Cult.

At Roland’s Doom, they dispatched many worgen but Mardigan had already been turned. Mardigan was subdued and underwent a Worgen ritual. The worgen marked him with the Scythe of Elune and was then bitten by the Worgen pack’s leader. After he was bitten, his father Karlain accompanied by Revil Kost and Ambrose, rushed in to slay the worgen. The battle ended in their victory but Mardigan ran off in the woods during the battle and Ambrose was slain during the fight. As they buried Ambrose, they were attacked by a worgen that has been discovered to be Mardigan, fully transformed and rabid. He was subdued and Karlain used a rage suppressing potion on him allowing him to recognize his father. Though their relationship was still rocky, Karlain assured his son he would do everything in his power to cure him.

Later on they drifted off to sleep but they were awoken by Revil Kost. Revil Kost was taking them to someone who knew of a worgen cure but in reality he was using them as bait for the Dark Riders. His ploy worked as the Dark Riders attacked them. Fortunately, Revil had prepared an ambush for them and had the Night Watch Militia and Brink, the rogue gnome, bolster their party. When the battle turned unfavorable for the Dark Riders, one of the Dark Riders teleported the whole party to Karazhan. Revil Kost wondered off and Karlain was attacked by more Dark Riders. Mardigan savagely defended his father and Karlain did the same for his son but the floor gave in and they both fell to another floor of the tower. In this floor, Mardigan was shown a false vision of his father murdering his mother in a jealous rage. This vision enraged him to the point where he lost himself to his beastial fury and he turned to attack his father but was subdued by his magic. Revil who had rejoined them, used his Cloak of Purity to ward off the fel magic of the tower and Mardigan was able to see the true vision: Karlain defending his wife from a rapist but accidentally killing her in the process. Having seen his father’s regret and sorrow for his actions, Mardigan was able to calm himself and forgive his father. With the danger passed and their family bond restored, Karlain teleported the party out of the tower. Karlain stated his intention to search for a cure for his son which will require more investigation on the Wolf Cult. Seeing as Revil looked like a man in need of a purpose, the family invites him to journey with them on their quest. Brink, who had acquired their stolen artifacts, gave Karlain back the Hand of Azora, an artifact to Revil, and the Scythe of Elune to an unknown night elf.[2]

At some unknown point in time after the events in Duskwood, Karlain was chosen to be a member of the Six.[3][4]

Karlain was present during the meetings of the Council of Six and Jaina Proudmoore who was asking for help in defending Theramore and attacking Orgrimmar. 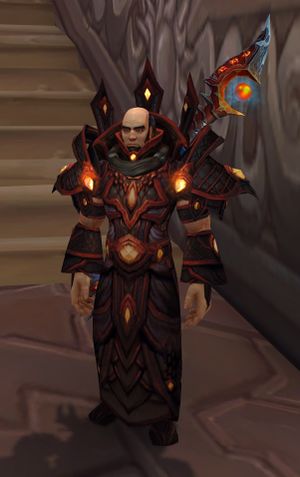 Karlain and the rest of the Six gathered to vote for the acceptance of the Horde into the Kirin Tor. Karlain voted in favor of this. He then assisted the mages in relocating Dalaran above the Broken Isles.

Aethas Sunreaver sought to return to Dalaran after being expelled in the Purge of Dalaran, and used the retrieval of

[Felo'melorn] to help convince the council. Khadgar had the Council of Six take a vote. While Ansirem Runeweaver expressed doubt that Aethas wouldn't just betray them again, Karlain brought up that if Aethas had any ulterior motives he would have simply given Felo'melorn to one of his Sunreavers. Convinced by Karlain's words, Ansirem voted yes to accepting Aethas back into the Kirin Tor.

When Vargoth is revealed to have ties with the Empyrean Society, Karlain reveals that he has seen Vargoth acting oddly.[5]

He later traveled to Karazhan in Deadwind Pass.

The subject of this section was removed from World of Warcraft in patch 7.2.0.