Daelin wrote Katherine a letter about Derek's death during the Second War.[2]

When Jaina was young, Katherine moved heaven and earth to smooth Jaina's path. She had to fight Daelin to send her to train in Dalaran as a mage.[3]

When Jaina began to date Prince Arthas Menethil of Lordaeron, their parents discussed their relationship and tacitly permitted the courtship.[4]

In Boralus, the capital of Kul Tiras, Katherine gave a speech at the statue of her husband about how he had brought the Kul Tiran fleet to Theramore in search of Jaina after the Third War, only to be betrayed by his own daughter as she stood aside while the Horde killed Daelin. Feeling betrayed by Jaina, Katherine felt that she forgot to teach Jaina humility or loyalty to her people.

Afterward, Katherine was approached by Admiral Copeland, who came with news about the renewed conflict between the Alliance and Horde. Katherine dismissed it as Kul Tiras had left the Alliance after Daelin's death so the war was none of their business, but Copeland pressed the issue that the Horde would surely attack Kul Tiras and their ties with the Alliance should be renewed. Katherine declined once more, for she did not want to appear weak by begging for help. When Copeland proposed reaching out to Jaina for aid, both Katherine and her close friend Priscilla Ashvane shot that down as well. Kul Tiras would protect its own.[3] 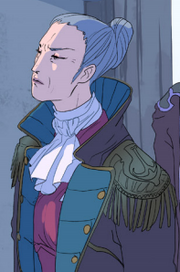 Years after the Invasion of Durotar, Jaina returned to Kul Tiras to ask them to rejoin the Alliance. Instead, Katherine, urged by her close friend Priscilla Ashvane, had Jaina labeled a traitor for her role in Daelin's death and had her taken away to face judgment.[5]

Katherine had heard the rumors about Priscilla just like anyone, but whether out of fear or loyalty she chose to ignore them. Taelia and an adventurer from the Alliance spoke to her to reveal the truth about Priscilla's plans to usurp the Proudmoores, but Priscilla admitted to all of it and then escaped the scene by igniting a smokescreen.[6] Although the attacking forces from the Ashvane Trading Company were dealt with, Priscilla herself ultimately got away by jumping into the sea when she seemed cornered.[7] Afterward, Katherine apologized for the Alliance's treatment when they first arrived in Kul Tiras and, while she made no promises for any formal accords just yet, she did wish to parley with the Alliance leaders.[8]

When the Horde retrieved the corpse of Katherine's son Derek from the bottom of the sea, they put him on display to anger Katherine who sent the Kul Tiran fleet to retrieve his corpse. However not only did the fleet fail to do so, but the Horde had used Derek as a distraction while Horde agents infiltrated the city to steal the Abyssal Scepter, a tidesage artifact.[9]

Later, Genn Greymane would convince Katherine to repeal Jaina's exile and Katherine would agree as she realized she had allowed Priscilla's poisonous words into her heart.[10] However, the problem was finding out where the Ashvane Company had shipped Jaina off to when she was exiled. When it was discovered that Jaina had been handed off to the Irontide Raiders, Katherine was horrified that they had killed her until Genn reminded her that the pirates had been hired to ship her off, not kill her.[11] Taelia, Flynn Fairwind, and an adventurer would eventually discover that Jaina had been sent to Fate's End, an island off the coast of Stormsong Valley where the worst criminals and traitors are sent, never to be seen again. Only the Tidesages can access it safely, and so Katherine asked an adventurer to ask Brother Pike for aid.[12][13]

Pike and the adventurer would discover that Jaina had been captured by Gorak Tul, king of the ancient Drust, and pulled into his realm of Thros, which explained the previous mystery of 'never to be seen again'.[14] With the help of the Drust druid Ulfar, the adventurer discovered a way into Thros, through Gol Inath in the Crimson Forest, and sent for Katherine via falcon to meet them there. She journeyed there accompanied by four of her honor guard but were ambushed by wicker creatures of the Heartsbane Coven, and the guards sacrificed themselves to save her.[15]

Katherine and the adventurer entered Thros to save Jaina. Within Thros Jaina was haunted by memories of her past, including Arthas at Stratholme, Varian at the Battle for the Undercity, and Daelin at Theramore. But Katherine, realizing that Daelin had lost himself, convinced Jaina to forgive herself for her actions.[16] The two returned to Boralus in time to fight it off from an attack by Ashvane and the Irontide Raiders. After clearing the city of enemies, Katherine gave Jaina her father's pendant, which she used to call forth the legendary Kul Tiran fleet, which until then had been captured in a magical storm by the Tidesages. The fleet, led by Jaina's brother Tandred, proceeded to surround the Irontide ships. Outnumbered, Priscilla surrendered.[17] Afterward, Katherine stepped down and named Jaina the new Lord Admiral of Kul Tiras.[18]

Some time later, Katherine was at Proudmoore Keep with her family near the memorials of Daelin and Derek, as well as Tandred's which he told his mother he appreciated. The family briefly discusses how Derek's was being used by the Horde to taunt them. With Tandred, Jaina, and Katherine together again, Tandred couldn't help but wonder what Daelin and Derek would think of what the Proudmoores and Kul Tiras at large had endured. The family discussion was cut short when the Horde attacked Anglepoint Wharf.[19]

Katherine and her daughter hosted Turalyon and Alleria Windrunner in Boralus, as they had come at Anduin's request should Mathias Shaw discover nothing on the Zandalari coast in regards to their hunt for Sylvanas Windrunner. They were soon interrupted by Flynn Fairwind, who reported that Shaw had been taken prisoner by the Zandalari Empire. When her guest jumped to the conclusion that Sylvanas was working with the Zandalari, Katherine witnessed her daughter tell them not to add fuel on an already kindly fire and risk the treaty. She then watched Jaina's declaration that she would use the treaty itself before turning to the blade.[20]

Jaina Proudmoore says: Lorena would have wanted you to have this. She shared so many happy stories of you and her brothers while she served in Theramore. I am so sorry for your loss.