Kayn Sunfury is a blood elf demon hunter and prominent member of the Illidari. He is a loyal soldier and one of Illidan Stormrage's most trusted lieutenants. Honorable and demanding, as well as a fearless leader and a master strategist, he believes that cooperation and sacrifice are necessary to defeat the Burning Legion. Kayn follows Illidan's ideals to get the job done, no matter the cost.[1]

Kayn is one of two characters player demon hunters can choose to be their second-in-command, the other being Altruis the Sufferer, whose ideals and plans for the Illidari are incompatible with Kayn's own. 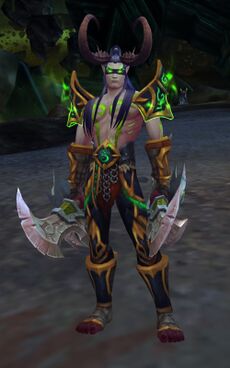 Kayn first appears as a quest giver located at Despair Ridge on Mardum.

Kayn feels greatly betrayed by Altruis the Sufferer, a renegade demon hunter who left Illidan's cause and orchestrated the deaths of many Illidari. For this, he is unwilling to forgive him when they are reunited in the Vault of the Wardens.

The storyline varies depending on the player's decision during

[100] A New Direction. If they choose Kayn as their second-in-command, Altruis will depart, and vice versa. The following describes the storyline for players who choose Kayn. For the Altruis version, see Altruis the Sufferer's article.

Kayn sent Kor'vas Bloodthorn to find the demon hunter to report to him immediately at Krasus' Landing. To find the Aldrachi Warblades, he said that Archmage Khadgar had something called a

[Crystallized Soul]. They will die in their master's name as will Caria Felsoul.

Upon returning to the prison world of Mardum to make it their new home, Kayn addresses to the Illidari of the accomplishments of the demon hunter by obtaining the artifact. With the Fel Hammer in their control, they can plan out every aspect of their assault on the Broken Isles.

Kayn was met by the adventurer and Khadgar at Illidari Stand in Azsuna. Surprised and really impressed of the artifact the champion wielded, he told them to assist Allari and Jace as best they can to maintain ground against the demons there. He instructed the champion, Cyana Nightglaive, and Kor'vas Bloodthorn to attack from within the legion camp ahead. Unfortunately with the betrayal of Cyana as an end result, for the Illidari cannot afford to lose even a single demon hunter in their ranks. It was right to put her down and should meet up with the blue dragons that reside at their camp as they can be prove to be a powerful ally in the war against the Burning Legion.

Kayn was the first to become the champion's cause in their campaign. After collecting essences to communicate with their master, it was time to seek out other allies. If Kayn is chosen to lead as their second-in-command, they later go on to recruit the Shade of Akama instead of continuing to talking to Akama. The Fel Hammer then jumped to the Legion world of Niskara to take out the Felsoul siblings. With their mission successful, he announced the demon hunter to slayer and told them that their artifact can awaking great potential when the time came.

Kayn participated in the Battle for the Exodar battling against High General Rakeesh, alongside Asha Ravensong. 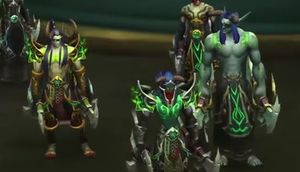 Both Kayn and Altruis together on the Fel Hammer.

We must eliminate the Legion threat on this ridge so that you can bring the rest of our forces in from the Black Temple.

Kayn, tell me what you know about Mardum.

Eons ago, Sargeras created Mardum to imprison demons. He also created the Sargerite Keystone to lock them away.

But when the Titan decided to burn all of creation, he shattered Mardum, sending its fragments hurtling throughout the Twisting Nether. Thus was born the Burning Legion.

Sargeras safeguarded his keystone on this particular fragment. It's a 'skeleton key', allowing access to any Legion world. It's also the key to Lord Illidan's plan for the Legion's destruction.

<Name>, we must take the fight to the Legion here in the volcano. They must be destroyed before we fly up to the Brood Queen's command ship, the Fel Hammer.

Then we'll kill her, take the Sargerite Keystone, and return to the Black Temple to slay the invaders.

No small feat, but I think we'll manage.

Vault of the Wardens
I am suspicious of Altruis's motivations, but for now, we have the same goal - getting out of this prison.

Why don't you get along with Altruis?

Many years ago, during Lord Illidan's time at the Black Temple, Altruis the Sufferer split from our leader and the demon hunters.
Believing that Illidan had become the very thing he hated, Altruis then began a sinister campaign to orchestrate our master's downfall.
He was instrumental in the deaths of four of our comrades - Alandien, Theras, Netharel, and Varedis.
These were our teachers, our brothers and sisters.
For that, I cannot forgive him.

During the escape from the Vault of the Wardens, Kayn mentions to Maiev Shadowsong that he, too, has felt betrayal by his own kind. While presumably referring to Altruis' betrayal of the Illidari, it could also be a nod to Kael'thas Sunstrider's defection from the Illidari to the Burning Legion, which Illidan learned of some time before the siege of the Black Temple.[6]