The third boss in the Battle for Mount Hyjal, Kaz'rogal is a rather tough DPS race.

Kaz'rogal didn't appear in any source during the Third War. Adventurers of the Horde and Alliance entered a time pocket of the Battle for Mount Hyjal.[1] Kaz'rogal was a lieutenant of Archimonde and attacked the orc base, but was killed by adventurers from the future, aided by troops of the Third War and Thrall. 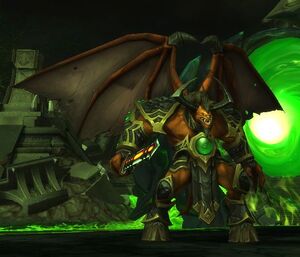 Kaz'rogal before the Black Gate.

Kaz'rogal returns with Archimonde to Draenor and is seen in Hellfire Citadel. He is defeated by the adventurers of the Horde and Alliance.

See the MH Boss Tips for general info, only one tank required. It may be possible for Tauren player characters to melee Kaz'rogal from outside the range of his warstomp, due to their slightly larger melee range.

All mana users should wear some epic Shadow resistance gear, because the Mark of Kaz'rogal and all of its effects can be resisted. The whole raid should have the

[Shadow Protection] buff from priests. Due to their low mana, protection paladins should take extra care not to hurt others when they AoE from the Mark emptying their mana pool.

If Thrall and his NPCs, particularly the tauren warriors, are all up they can do about 15% damage on their own. This can be very important near the end of the fight - there are reports of Kaz'rogal first kills with only one surviving raid member watching while the NPCs brought down the last 7% or so.

In order to speed things up its possible to have the MT kite Kaz'rogal through the two groups of NPCs, but it's just as feasible to wait until they enter the fight by themselves (which they usually do in any case). Kiting is detrimental to raid DPS, so it should be done only if the NPCs do more damage by their early entry than is lost due to aggro problems by the raid.

Mana users need to do anything they can to keep their mana up.

[Flask of Mighty Restoration] and

[Blackened Sporefish] as well as

[Superior Mana Oil] should all be in effect. Shadowfiends,

[Shamanistic Rage], etc must all be available. Mages may use

[Ice Block] and Paladins may use

[Divine Shield] before (or immediately after) being afflicted by Kaz'rogal's Mark, thus avoiding one completely.

[Bloodlust] can be used early (but not too early, watch aggro) so that the high mana cost can be recovered before the first mark, or can be used late, when death is inevitable anyways. Resto Druids can shift to cat or bear forms in order to avoid death from the mark. Innervates should best be used on Shadow Priest(s).

[Life Tap] should be avoided as much as possible in order to avoid additional strain on raid healers' mana. Toward the end of the fight when the debuff is cast more often [around every 15 seconds or so], many hunters choose to leave it on Viper until Kaz'rogal dies. When a mana user runs low, it's a good idea to burn the last mana quickly, and then move to a safe spot, not to harm others.

Battle rezzes (Soulstone, Ankh etc.) are only of limited usefulness because raid members are rezzed without buffs and less than a full mana bar, therefore they usually die again on the next Mark. Nonetheless, if used right after a Mark, a rez can mean one-half mana bar of nukes (or heals on the melee group), which can make the difference in a tight fight.

The first Mark of Kaz'rogal is cast after 45 seconds. The time until the next Mark is cast is reduced by 5 seconds each time, so that the 2nd mark happens at 1:25, the 3rd at 2:00 and so on. In the end, it's cast every 10 seconds. This works in effect like a soft enrage, after about four minutes mana users inevitably start to die. After some time all healers are dead, the last surviving raid members are usually rogues or DPS warriors, who must stay out of melee range and hope the NPCs bring the boss down.

Aggro
Cry for mercy! Your meaningless lives will soon be forfeit.