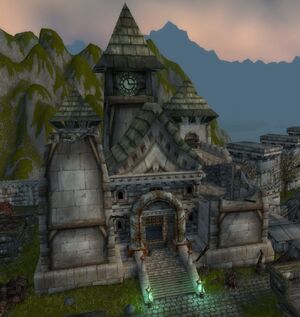 Stromgarde Keep in the Arathi Highlands.

Keeps are the center of advanced military communities. They are often protected by strong walls, and several races besides those of the Alliance are known to build them.

In large and well-defended settlements, the keep replaced the town hall as the center of commerce where peasants could deliver shipments of gold and lumber for processing. The artisans who dwelled here had mastered means of better extracting the gold from the ore mined by the peasants, thus increasing the yield of mining operations. The keep was also a military structure protected by high granite walls, making it difficult to destroy. Advancing legions of orcish warriors forced the Alliance to assign their elite troops - the knights of Lordaeron and the mysterious elven rangers - only to such places, where their presence could serve to deny the Horde further strategic gains. As control of these towns became more critical, the keep could be needed to be upgraded into a castle.[1]

With the advancement of human technology and the need to support growing numbers of fighting troops, the town hall may be upgraded to a keep. In addition to adding heavier fortification, the keep allows for the introduction of the mage class into human society. The keep can later be upgraded even further, to a castle.[2]

The Keep helped the high elves to fend off Arthas and the Scourge as he tried to attack their capital of Silvermoon City and Quel'Thalas in Warcraft III: Reign of Chaos by serving as a returning point for gold and training units. However, the Keep couldn't be built by the high elf worker unit likely due to the limited ability of the map editor prior to the Warcraft III: The Frozen Throne expansion. With the addition of The Frozen Throne expansion's map editor, it is possible to make additional groups with building orders.

The keep also helped the blood elves and Kael'thas during the Curse of the Blood Elves campaign in The Frozen Throne. This keep produced unique blood elven-only units. 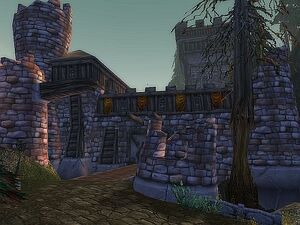 A keep is a fortified stone building which has fifteen to twenty-five rooms. A keep surrounded by a stone wall is known as a castle.[3] 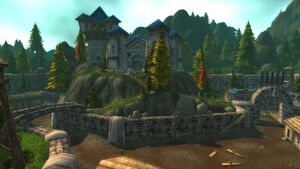 Durnholde Keep in the Hillsbrad Foothills. 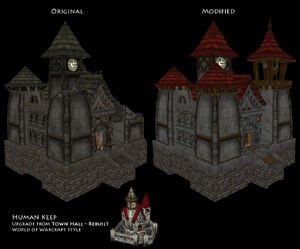 Fan rendition of a rebuilt keep.

The exterior of Stormshield Keep.

Keeps can be found as the center, or at least military center, of many human towns. Keep can also refer to both the building and the town within its walls.

Buildings that are distinctly ruined keeps have a clock tower like they did in Warcraft III, but there is no intact keep model. As an example, Menethil Keep previously had a barracks model when it was intact, but now that it has been partially destroyed it uses a keep model with a clock tower.

This continued with the new style of buildings used by the Alliance in Northrend, where keeps are similar but again distinct from the barracks due to their tower. Sadly this does not stop the confusion, as Recruitment Officer Blythe calls the presumed keep part of Valiance Keep a barracks in

To make matters worse, dwarven keeps like Dun Garok and Angor Fortress were previously often described as either keeps or barracks.[4][5] Keeps of other races exist as well.

See also the Dwarven Bunkers, which were inspired by the design of dwarven keeps.

These could be considered as strongholds instead. Some of them uses a barracks model.