This article is about the titanic beings. For the sons of Cenarius, see keeper of the grove. For the sethrak order of the same name, see Keepers (sethrak). For other uses, see Keeper (disambiguation). 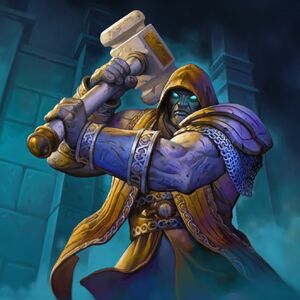 The keepers are titanic watchers who were imbued by the Pantheon with their specific likenesses and powers. They are Archaedas, Loken, Thorim, Freya, Mimiron, Hodir, Tyr, Ra, and Odyn. These nine would lead the titan-forged armies against the Black Empire, and later create most of their lesser brethren and shape the world.[1] Some keepers are considered to be legends and myths by other races.[2] 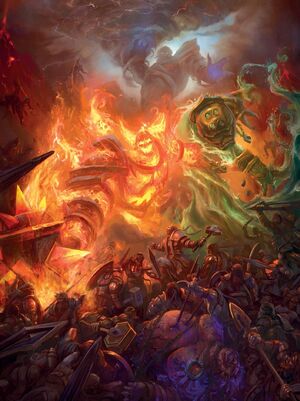 The titan-forged fighting the elemental armies of the Old Gods

The keepers led the titan-forged armies to victory against the Black Empire, stabilized the slumbering world-soul's bleeding thus creating the Well of Eternity, established Ulduar as their base of operations, created the Forge of Origination and Forge of Wills, and created more titan-forged races such as the earthen and mogu.

After Tyr helped five proto-dragons — Alexstrasza, Ysera, Nozdormu, Malygos, and Neltharion — to combat Galakrond in Northrend, the Pantheon empowered the proto-dragons through the keepers, transforming them into the first Dragon Aspects.[3] The keepers' leader Prime Designate Odyn objected to this because the dragons were not titan-forged, and created his own army, the Valarjar, within the Halls of Valor to in his mind better fulfill the dragons' role.

Fall of the Pantheon

When the titans of the Pantheon were slain by Sargeras, Norgannon cast a spell that sent their spirits flying towards Azeroth and into the keepers, but the latter could not withstand the entire might of their souls. The keepers were overwhelmed by an influx of fragmented memories and, puzzled by this, they called out to the Pantheon for answers, but never received a reply. 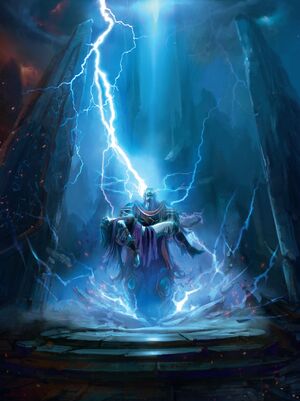 Keeper Thorim discovers the body of his wife, Sif.

The corruption of Loken by the Old God Yogg-Saron within Ulduar led to the disunity of the keepers. After Loken accidentally killed Sif because of the Old God's influence, the wife of his brother Thorim, he was desperate to keep his actions a secret. This resulted in Mimiron, Freya, and Hodir being corrupted into complacency within Ulduar's halls, Thorim retreating to the Temple of Storms in depression, and Odyn being locked within the Halls of Valor by his adopted daughter Helya.

Tyr and Archaedas saw what was going on and confronted Loken, stealing the Discs of Norgannon before fleeing south along with their friend Ironaya and several earthen, vrykul, and mechagnomes. Tyr defended the escaping party from C'thraxxi sent by Loken in what would one day be known as Tirisfal Glades, while Ironaya and Archaedas continued on to Uldaman. With the Discs of Norgannon gone, Loken created the Tribunal of Ages as a false record of history to cover his tracks.

Later, Ra, far to the south, learned that the Pantheon had died and fell into despair. He remained within the Mogu'shan Vaults for thousands of years until he was found by Lei Shen, who took his power and vowed to continue the titans' goals.

During the war against the Lich King, adventurers of the Alliance and Horde invaded Ulduar and defeated Loken and Yogg-Saron, and freed the other keepers of Ulduar.

During the Burning Legion's third invasion, Ulduar and its keepers came under attacks from the demons. The goal of the attacks might or might not have been the souls of the titans inside of the keepers.[4]

From above the Broken Isles, Odyn and his Valarjar from the Skyhold joined the effort against the Legion. With the help of the mortal adventurers, he was freed from his imprisonment when they killed Helya in Helheim. He said he would want to visit Ulduar once again.

Other names and titles