Keeper of the grove

Sometimes, the keepers make use of the Emerald Dream in their duties.[2]

Like their dryad sisters, the keepers appear to be half night elf and half stag. They have enormous antlers and manes of leaves that flow down their backs. One of their hands is disfigured and twisted — as if it had become like the gnarled root-claw of a treant. Keepers possess many strange powers over nature and can be counted among Azeroth's best healers. Though they typically remain within the sacred groves of Ashenvale, the keepers always heed the call to arms when the greater lands of Kalimdor are threatened.[3]

During the Battle of Mount Hyjal in the Third War, many keepers of the forest joined the army and fought against the Burning Legion.[4] 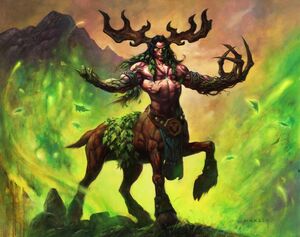 Keepers of the grove are thought to be descendants of Cenarius' sons Remulos and Zaetar.[5]

While many sources refer to the keepers as the sons of Cenarius,[citation needed]  there is some controversy over whether Cenarius fathered a number of keepers, or just two. Keeper Celebras speaks of the "Sons of Cenarius: Remulos and Zaetar", which some interpret to mean that Cenarius had no other sons. Others do not interpret this so strictly, suggesting it could refer to the two most important sons, or the two sons relevant to the tale. A major difficulty with strictly interpreting Celebras' speech is that he describes Remulos' children as including himself and his sisters, making no mention of any other sons. It is possible that night elves may be the offspring of Cenarius as well. Dryads, keepers, and night elves are sometimes referred to as "Cenarius' favored children". Dryads and Keepers are often described as having the upper bodies of night elves. 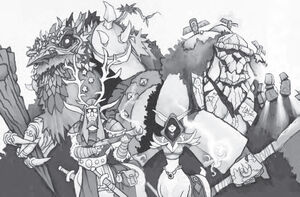 Playable keeper of the grove in the RPG.

A keeper of the grove uses the forests to aid him in battle. As a first action, the keeper uses his greater force of nature spell-like ability to animate trees near his enemies. He takes full advantage of thick undergrowth and his woodland stride ability to outmaneuver foes and stay out of melee. If necessary, he casts plant growth to create thick undergrowth. By casting entangle or entangling roots each round, the keeper hopes to keep his enemies away from himself, and immobilize them so his summoned treants can attack stationary targets. If the keeper of the grove has time to prepare, he casts aid. If the battle goes poorly, he casts tree stride to escape.

A keeper of the grove's right hand is gnarled and twisted like the clutching roots of a tree. A leafy, barbed vine grows from the end of his hand and wraps itself around the keeper's arm. The keeper of the grove can extend this vine at will and use it as a short whip for melee attacks, or he can snap it to send out a barbed projectile as a ranged attack. The keeper of the grove can fire 12 such projectiles per day (the barbs grow back by the next day). The whip functions like a spiked chain with a reach of 5 feet, and the barbs are equivalent to thrown darts.[6]

Keepers primarily speak Darnassian and Common. Keepers of the grove occasionally learn the languages of Kalimdor's natives — such as Low Common and Taur-ahe.[7]

Whispers of the Old Gods

These keepers have been corrupted by the Old Gods.