Keldor the Lost was an elite level 85 Arathi Basin battlemaster located in the Lower City of the neutral Shattrath City during the Call to Arms: Arathi Basin.

He was only available during the monthly (Call to Arms: Arathi Basin). 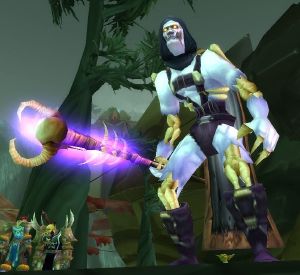 As with Adam Eternum, the Alliance's Arathi Basin battlemaster in Shattrath, Keldor the Lost is a real-world reference to the animated series He-Man and the Masters of the Universe. "Keldor" was the identity of He-Man's arch-nemesis, prior to his transformation into the evil Skeletor. Being undead, Keldor the Lost's hood, glowing eyes, dark blue attire, and skull-tipped staff all bear a striking resemblance to Skeletor. In addition, he will even cackle when you finish speaking to him.