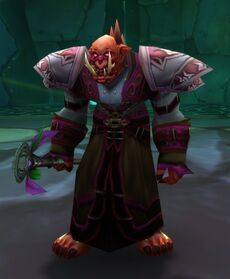 Keli'dan in World of Warcraft.

Keli'dan the Breaker, the fel orc jailor of Magtheridon, is the final boss in the Blood Furnace wing of Hellfire Citadel.

When Illidan overthrew the pit lord Magtheridon and took control of Outland, he had the demonic leader imprisoned beneath the Hellfire Citadel. Only the most stalwart among Illidan's forces could ever hope to keep him contained; the ruthless orc, Keli'dan, was the only possible choice.

The Keli'dan encounter is composed of two phases. With a Priest or Paladin (for

[Cleanse]) and a skilled tank, the battle is trivial. Shadow resistance will help in this fight but is not necessary.

First, Keli'dan's five Warlock companions must be killed. Individually, they are not very strong; if the party can crowd control two or three of them, so much the better for surviving the encounter. If there isn't any (or much) crowd control, have the tank pull the 4 or 5 loose warlocks around the corner into the room the party just came in from. The warlocks will all clump up in the doorway and begin casting on the puller, making them easy to AoE. Be sure to have the tank stationed near the door for when Keli'dan aggroes. This can be made more easy if you have a Warlock in group that could enslave one of the Felguards that's just outside the room, the Felguard can tank the first phase easily. This cannot be done in Heroic mode, as the demons cannot be enslaved.

The warlocks will cast Shadow Bolts causing approximately 1000 shadow damage. They also will cast Mark of Shadow (magic debuff,all shadow magic taken is increased by 1100, lasts 2min.) It has a short casting time, so, if possible, remove the debuff immediately. Try not to let the warlocks all gang up on one character if you can't dispel their debuff, or that character is dead if he or she gets hit with a few bolts with the debuff active. If your party has no magic dispelling ability, keep the last warlock sheeped or otherwise crowd-controlled while waiting for the debuff to expire. Don't fight the boss with any debuffs active if you can avoid it.

Once the last warlock is dead, Keli'dan will come for the party. He casts Shadowbolt Volley, deals 1000 damage to all enemies within 40 yards.

Keli'dan will also occasionally yell, "Closer! Come closer! And burn!" and will stand in place, immune to all damage for a few secs, then suddenly blasting away with Burning Nova, deals AoE fire damage to anyone in a surprisingly large radius. The tank and any melee DPS should run away from him (run, don't back up) when he begins his yell and they will be able avoid this damage completely. However, if no-one is in the radius of Burning Nova, he will still cast Shadowbolt Volley at everyone.

Keli'dan will pull every player toward him before he begins Burning Nova, making it harder to avoid it.

If you stand near him you won't get pulled in, giving you more time to run away, though this tactic of course still leaves the fight rather tricky for hunters. However, if you start running the second you are pulled in then you can still get out of the blast radius in time.

While the pulling does increase the time it takes to run out, it does give ample visual warning to get moving. This will work best with a less organized group, that cannot call out the nova over Teamspeak or Ventrilo for players standing close.

As soon as his blastwave is completed, he will throw another shadowbolt volley. It's imperative that the magic debuff that gets applied to the party is removed before this. It will increase the damage from the shadowbolts by 1500. He also applies the debuff to the party throughout the fight, so it will need to be constantly removed.

It is possible to reset him, just run up the ramp and wait for him to yell "Closer! Come closer! And burn!", after he does his AoE he will run back, and reset.

It is possible to acquire a "debuff" called Rage of Magtheridon during this fight by stepping into one of the bright blue lights streaming up from the ground. The effects are "Melee Attack Speed increased by 30%, Ranged attack speed increased by 30%, Spell casting time decreased by 30%" It lasts for 30 seconds and appears as a debuff and cannot be removed. The light will vanish when it gives the debuff, but there are more than five of them around, so everyone can start with one to expedite the slaughter of the Channelers.

Aggro
Who dares interrupt--What is this, what have you done? You'll ruin everything!