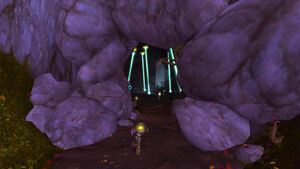 is a well-defended cave on the Orunai Coast east of Shattrath City in northeastern Talador.

The cave is guarded by three devices:

The two latter devices, if they hit, will knock off 75% of max health:

The trick is to stay out of the slowing wards at all costs, and run along the outside edge of the sentry ward detection area, getting out of the blue circle before the beam gets too close. Dodge all the traps to reach Ketya's Stash, bathed in a column of light in the back of the cave. The stash contains

[Stonegrinder], a companion pet, a mint-condition version of

[A Steamy Romance Novel: I'm In Love With a Robot], and roughly 60