From Wowpedia
(Redirected from Key of the Three Moons (Warcraft III))
Jump to: navigation, search

Were you looking for the item Key of the Three Moons?

Key of the Three Moons is the fourth chapter of the Warcraft III: Reign of Chaos undead campaign, Path of the Damned. 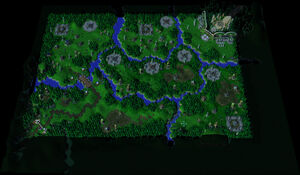 A second enchanted Elfgate blocks the path to Silvermoon City. To bypass the mighty gate, you must locate and combine the three separate Mooncrystals which, when pieced together, form the Key of the Three Moons.

Now that the Key of the Three Moons has been completed, you must bring it to the heavily guarded Elfgate and unleash its ancient power.

Arthas and his forces destroy an elven gate and overrun its defenders, eventually reaching a bridge where Sylvanas faces them.

Sylvanas Windrunner: Fall back to the trees!

Sylvanas Windrunner: You've won through this gate, butcher, but you won't get through the second. The inner gate to Silvermoon can only be opened with a special key, and it shall never be yours!
Sylvanas retreats to the far end of the bridge.

Arthas: You waste your time, woman. You cannot outrun the inevitable.

Sylvanas Windrunner: You think that I'm running from you? Apparently you've never fought elves before.
Sylvanas fires several arrows into the sky, causing the bridge to collapse into the river.

Arthas: Damn that woman! We must find a way to cross the river!

Arthas: Fear not. The crypt fiends can force them to the ground!

Kel'Thuzad: That mooncrystal is a component of the Key of the Three Moons. The other two crystals must be found...If the elfgate is to be unlocked.

Arthas: The crystal glows brightly. There is no effect on a gate.

Kel'Thuzad: As I said, You must find all three mooncrystals for the key to be whole.

Arthas: We'll see about that.

Arthas: The second mooncrystal is ours!

Kel'Thuzad: At last, the third mooncrystal! The Key of the Three Moons is complete!

Arthas: Finally...
Arthas breaks down the elfgate and rides through it.

Arthas: The gates have been opened! Once we've dealt with Sylvanas, the inner kingdom shall be ours!

Sylvanas Windrunner: Damn you monsters! What will it take to drive you back?

Arthas: The ranger woman is starting to vex me greatly.

Having destroyed the outer elfgate, Arthas and his army pressed on into the Inner Kingdom, killing all in their path. Sylvanas ordered her forces to retreat over the Elrendar River, waiting alone to confront Arthas personally. She swore that while Arthas had gotten through the first gate, he would never breach the second, since the inner gate to Silvermoon could only be opened by a special key, which she would make sure he never possessed. Arthas watched her retreat, sneering that she was wasting her time trying to "outrun the inevitable". Sylvanas commented she was not running and remarked Arthas had clearly never fought elves before, upon which she used a magic arrow to destroy the bridge, the only crossing point over the Elrendar, thus delaying the Scourge's advance.

Furious, Arthas ordered his soldiers to find another way across the river. The undead fell upon a small village trapped on their side of the river, slaughtering the helpless villagers, destroying the buildings and raising their own base upon the ruins. Arthas's forces were bolstered by two new arrivals: greedy goblins willing to offer their zeppelins to the death knight, and a new form of solder; the spider-like Crypt fiends. These arachnid warriors quickly proved their worth when a force of dragonhawk riders attacked, shooting their webs over the airborne riders, bringing them down and leaving them at the mercy of the undead.

Having assembled a substantial force, Arthas used the zeppelins to ferry his army to the nearest elven settlement to the east, which the Scourge destroyed swiftly. In the aftermath of the slaughter, Arthas found in the ruins of a temple a strange crystal. The shade of Kel'Thuzad told him the crystal was part of the Key of the Three Moons, the key required to open the inner elfgate. Knowing now what he needed to do, Arthas quickly reassembled his army and fell upon the next elven settlement, this time to the north. This village offered little more resistance than the first; it was quickly overrun and Arthas claimed the second crystal from the ruins of the temple there. Finally, the Scourge army fell upon the final elven village to the west. This one proved more of a challenge, for Sylvanas and her army were positioned there, and they fought like ones possessed to defend it. Though the efforts of the high elves delayed the undead for a time, ultimately, the Scourge would not be denied, and the settlement was taken. Sylvanas and her surviving forces retreated back to outposts they held in the forests while the Scourge ravaged the fallen settlement, and Arthas claimed his prize from the ruins of the third temple. With all three crystals in his possession, the Key of the Three Moons was complete and the way onward was now open to the Scourge.

Arthas retreated back to his base, where he began to gather his forces for a final assault on the inner elfgate. In a final defiant gesture, Sylvanas obtained some zeppelins of her own, as well as more dragonhawk riders, and led them in desperate hit-and-run attacks on the Scourge, hoping to prevent their advance, but ultimately, once a suitable force had been raised, Arthas departed with his army and fell upon the defences of the inner elfgate without mercy. The elven defenders bravely fought to the end, but they were too few and too weakened to put up much of a defence, and were killed down to the last elf. With the defences gone, Arthas used the Key of the Three Moons to blast open the elfgate; the way to Silvermoon was now open to the dead. Sylvanas ordered her remaining forces to retreat to their holdings on the city's outskirts, wondering if there was any way to drive the undead back, while Arthas, growing ever more vexed by the Ranger-General's defiance, vowed to deal with her before he marched on the elves' capital.

While the game depicts Sylvanas using magical arrows to sink the bridge, Arthas: Rise of the Lich King reveals that she actually used an "extremely non-magical, quite practical incendiary device" to cause the bridge to explode.[2] Furthermore, in the book, Arthas didn't hire goblin zeppelins and instead ordered the weakest ghouls to make a bridge with their bodies. Using this tactic not only helped him cross, but also poisoned the waters of Quel'Thalas.[3]