From Wowpedia
(Redirected from Khaz'Goroth)
Jump to: navigation, search 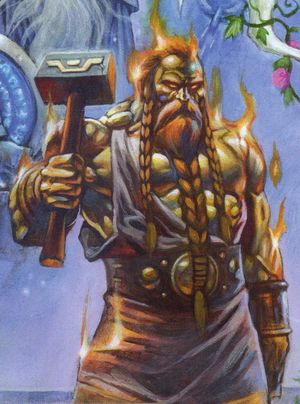 Khaz'goroth in the Warcraft Saga

Khaz'goroth (or Khaz'Goroth) is the titan shaper and forger of worlds.[2]

During the war between the titans and the Old Gods, the great forger Khaz'goroth oversaw the creation by the Pantheon of enormous servants from the crust of Azeroth itself, the titan-forged. Each titan then imbued a number of them with their powers. Khaz'goroth bestowed his mastery over the earth and forging to Keeper Archaedas.[3]

After the fall of the Old Gods, the Pantheon set out to order Azeroth. They gave the Keepers great tools to help them shape the world known as the Pillars of Creation, among which was the

[Hammer of Khaz'goroth]. The titanic watcher Nablya observed and performed experiments within Un'Goro Crater on his behalf.[4] Through Archaedas, Khaz'goroth bestowed some of his vast power upon the mighty black wyrm Neltharion, who became one of the five Dragon Aspects. The great-hearted Neltharion, known thereafter as the Earth-Warder, was given dominion over the earth and the deep places of the world. He embodied the strength of the world and served as Alexstrasza's greatest supporter.[5]

Khaz'goroth was killed by Sargeras alongside the rest of the Pantheon during the battle at Nihilam.[6] While their bodies were destroyed, their souls survived and launched themselves throught the Great Dark. The spirits then slammed into the Keepers of Azeroth.[7]

Sargeras would eventually capture the spirits of the Pantheon and bring them to the planet of Argus to be tortured and corrupted by the Coven of Shivarra into serving the Burning Legion. Aggramar was the first to succumb and be raised as an avatar.[8]

The titans' spirits were freed by the Army of the Light, Magni, the Speaker of Azeroth, and brave champions. They brought the world-soul of Argus to the Seat of the Pantheon where Sargeras turned Argus against them. The weakened titan spirits empowered the mortal champions who managed to defeat Argus the Unmaker. The titans then pooled their energy together along with Argus' and imprisoned Sargeras within their Seat, but not before he managed to wound the world with his sword. 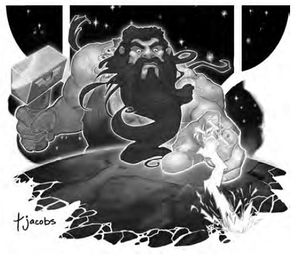 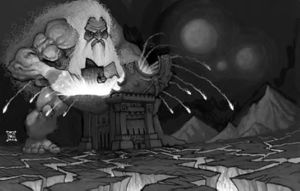 Small flames flicker across this stocky, bronze-skinned giant's body. He frowns in obvious disapproval, and clenches a massive smith's hammer.[10]

His name is spelled as Kaz'goroth.[11]

Khaz'goroth is a male Vanir titan. His classes are Expert and Fighter. He uses a hammer named Vulraiis.[10]

Shaper of mountains and canyons, Khaz'goroth is the ultimate craftsman. He is a master of many arts and disciplines; with Eonar's help, he created Azeroth's dwarves, troggs and, perhaps, mountain giants. He crafted the mountains in which the Ironforge dwarves dwell — their kingdom's name, Khaz Modan, means "mountains of Khaz." A fiery, brooding entity, Khaz'goroth loves working at his forge and listening to tales of heroism and valor.[12]

Khaz'goroth's portfolio encompasses earth, stone, metal, dwarves, troggs, mountains and craftsmanship. Most Ironforge dwarves know that the titans created them, but do not know exactly which titan — so Khaz'goroth receives little veneration. As the dwarves uncover more titanic mysteries, they will undoubtedly find ways to revere their creator.[12]

He was once in charge of a titan facility under Bael Modan.[13]