For the boss encounter, see Paragons of the Klaxxi.

“You fought many battles, toppled many foes, yet not a single action in your life mattered until you crossed the Serpent's Spine and entered our lands. You obeyed the Klaxxi. You released me from my long sleep in the amber. In doing so, you finally became useful.”

Kil'ruk the Wind-Reaver is one of the Klaxxi paragons, a mantid champion preserved from an era long-past. He is the first paragon the player meets in the Dread Wastes. He is a proud old soldier who saw value in allowing outsiders to aid in the Klaxxi's war against Grand Empress Shek'zeer.

This section contains information that needs to be cleaned up. Reason: Grammar.

Upon his breath Kil'ruk heard the song of the Empress guiding him to destroy attack those before the mantid swarm. While the rest of his flock curled up from exhaustion Kil'ruk continued on until he succumbed to fatigue on the fourth day. One day Kil'ruk witnesses a hawk in action and grew fascinated with it and attempted to emulate it by diving from the sky. Within record time he was able to dive at 25 strides from the sky. Unknown to Kil'ruk is action has grabbed the attention of the Klaxxi who began to watch him with growing interest.

Sometime after Kil'ruk desired a blade so that he could have talons in order to fight the battlements, though the ambersmith he spoke to was confused on why he wanted to do such a thing when he was a flyer. Kil'ruk's dedication also ensured by the tenth night he was able to dive seventy-five strides. Meanwhile on the fourteenth day of his life Kil'ruk earned the title Wind-Reaver for his successful actions in killing Taskmaster Xuexing and devastating the enemy when a desperate Xuexing tried to use the huatang in his last moments of life to kill the mantid, only to die and explode the energy around him. It was during this time that he successfully dived like a hawk, used his enemies swords like his own talons to the stunned amazement of his enemies such as Nysis, and soon after his victory encounter the hawk that had inspired him. Kil'ruk would soon come to the conclusion that hawks tastes delicious.

When Klaxxi'va Pok sought to speak with the Wind-Reaver, Kil'ruk was confused on why Pok would be disappointed that he would not put aside the empress's commands. After a mogu relic cut the mantid swarm off from the voice of their empress, the Klaxxi made the decision to awaken Ninil'ko the Bloodcaller to aid them and decided that Kil'ruk should be one to do so to ensure he's drawn out of his depression. With the tactics of the Bloodcaller, the Mogu were defeated and the artifact destroyed, though Kil'ruk was enraged that Warlord Gurthan used a spell to bind himself to an urn thus robbing the Wind-Reaver of the opportunity to kill the mogu.[1] 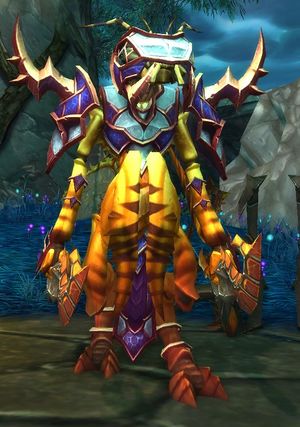 Using an item received from a Klaxxi oracle, the Wind Reaver is the first Paragon the players awaken and is the one who guides players to the Klaxxi. He bestowed the title of

[Wakener] on the adventurer and took them to Klaxxi'vess, where he was to execute them, but they were deemed useful and therefore spared. Eventually, he assisted the Wakener and his Paragon brethren in an assault on the Heart of Fear. After the battle, Kil'ruk sees fit to give the Wakener a warning that the Mantid's loyalty have always been to the Old God Y'Shaarj whom they venerate as "The Old One." He describes the hate the Mantid have for Titanic races, seeing them as the "Children of the Usurpers" and that if the Old Gods should ever return, the Mantid will side with them.

Garrosh Hellscream unearthed the Heart of Y'Shaarj. Seeing a common ally in Garrosh's True Horde and feeling the need to protect the last remnant of their god's body, Kil'ruk lead the remaining Paragons to Orgrimmar to battle the Darkspear Rebellion and Alliance's united front. He and the other paragons met their ends at the hands of the Wakener, who had sided against Garrosh and Y'Shaarj. However, his dying quote suggests that he could possibly return.

Conversation with Ka'roz the Locust
Kil'ruk the Wind-Reaver says: I have heard of your "heroism," Locust. They say your raids on mogu labor camps and farmlands delayed the completion of the wall by decades.
Kil'ruk the Wind-Reaver says: I cannot argue with your results, but how can a proud warrior of the swarm make his name chasing down fleeing peasants and farmhands?
Ka'roz the Locust says: Easily: You don't have to leap as far between kills.

Klaxxi enhancement
Gather enough enemies, and I will strike from the sky.