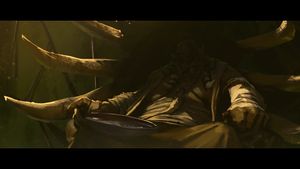 "Every chieftain must make hard choices for the good of the clan."

Before Kilrogg became chieftain, his father was the leader of the Bleeding Hollow clan. For years, disease had eaten away at the once mighty warrior's flesh, and as he faded, so too did the clan's hope for the future, for the arakkoa had claimed the jungle that the Bleeding Hollow once ruled.

When his son Kilrogg had had enough of his father's inaction, the chieftain ordered him to go to the clan's ancient chamber beneath Tanaan in order to perform the most sacred of rituals — carve out his own eye to gain a vision of his death. When Kilrogg returned, he spoke of a vision in which the clan crushed all of their enemies... but his father was not a part of it. Thereafter, Kilrogg killed his father with a stab in the chest and claimed the position of chieftain for himself.[1]

Kilrogg's father: Then we will find a way to carry on.
Kilrogg: Like this? Look at us! We were never meant to live this way! Jumping every time the wind blows...
Kilrogg's father: Every chieftain must make hard choices for the good of the clan.
Kilrogg: Is this the death you saw, then?
Kilrogg's father: No, this is not the death I saw. But perhaps it is time you finally saw your own. Go! Face your destiny.[1]

Kilrogg: I saw our clan strong and proud. Victorious against our enemies. A glorious vision of the future.
Kilrogg's father: Why, then, do you seem so troubled?
Kilrogg: Because you... were not a part of it.
Kilrogg stabs his father in the chest.
Kilrogg: You were right. Every chieftain must make hard choices for the good of the clan.
Kilrogg's father: At last... this. This is the death I saw! (Last words.)[1]

He may be related to Krahl Deadeye.