Kilrogg Deadeye was the warlord of the Bleeding Hollow clan and the ruler of Tanaan Jungle. He faced every battle with the confidence of one who had seen his own death.[2] Members of the Bleeding Hollow imbue themselves with berserk fury, slather their weapons in hallucinogenic venom, and stalk prey from the treetops, branding their victims' final moments with visions of pure horror.[3]

Kilrogg was born to the Bleeding Hollow clan of Draenor. With his people nearly decimated by the arakkoa, Kilrogg refused to wait for defeat. He sought the hidden chamber for which his clan was named and carried out a grim ceremony. It granted Kilrogg a vision of his own death far in the future, so he knew he would survive the day. Emboldened, he seized control of the clan and led the Bleeding Hollow to crush the arakkoa, then to victory in many battles after. In the years that followed, he brutally silenced his challengers, even those who were kin, and anticipated the destiny he saw for himself.[2]

A member of the newly forged Iron Horde, the Bleeding Hollow clan is composed of some of the most savage orcs on Draenor. Kilrogg believes his death-vision with absolute certainty, and he is convinced that the Iron Horde will lead him to his glorious end. His berserkers, equally eager to fight, prepare for war. They perform cryptic rituals and disappear into and out of the jungle with deadly intent. Those unfortunate enough to stray into their territory are rarely heard from again.[2] 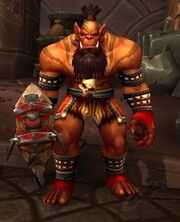 Kilrogg in World of Warcraft.

After disabling the Dark Portal and an Eye of Kilrogg, the warlord showed up and was attacked by Ariok who empowered himself. Later, he was seen on the same cliff with Grommash Hellscream and the other warlords as Grommash ordered the combined might of the Iron Horde army to head after the Alliance and Horde attackers.

He was later seen at Warlord's meeting in Mok'gol Watchpost. After the meeting, he departs to Tanaan once again.

He is present at Bladefury's Command in Talador, alongside Grommash Hellscream, where they are confronted by Gul'dan, who renews his offer of the Blood Pact. Grommash refuses, and is ultimately immobilized by Gul'dan. Kilrogg takes the offer, in spite of Grommash's warnings, and transforms into a fel orc, while Gul'dan takes control of the Iron Horde. He is referred to as the might of the Legion.

Kilrogg sent his scavengers to the area of the ruined Dark Portal.

He worked with Gul'dan to locate the Cipher of Damnation but was unsuccessful.

Kilrogg has captured Ariok. He is encountered in the Hellfire Citadel and is killed by the adventurers. As he dies, he confirms that this is the death he saw in his vision.

He may be related to Krahl Deadeye.